What Remains True by Nancy Naigle 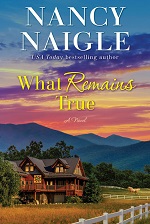 Working at a little shop on Main Street in a small town is exactly the break that executive Merry Anna Foster needs following her divorce. She’s made a bet with her ex-husband that she can live on the amount of money she’s giving him in alimony. If she can do it, then Kevin will have to stop complaining and leave her alone. But after three months of this new life, will she even want to leave Antler Creek? Adam Lockwood, bull rider and owner of the local feedstore, is having the best year of his rodeo career. He’s also a bit distracted by the pretty new neighbor living in his old bunkhouse. But Adam has no time for matters of the heart. He’s got his future all mapped out, and that future doesn’t involve a woman just yet. It doesn’t involve parenting a little girl either. However, Carly Fowler still suddenly leaves five-year-old Zan—the daughter Adam didn’t know he had—in his care. Is it possible that the future holds a life even better than what Merry Anna and Adam had each dreamed of? One that includes both tenderness and even love—not just for each other but for Zan too.
You can start reading the book here.

Naigle has given readers a touching story of two people finding their way to being open to love. It is sort of an adult coming of age story. Both Adam and Merry Anna must work through many obstacles to consider the possibility of romance. While all of the characters are written well, my favorite was Zan. What a sweet girl. The plot is typical for romance, a budding relationship progressing with misunderstandings and hurt. The ending seems a bit rushed and is somewhat inconclusive. Perhaps we are to be expecting a sequel.

My frustration with the book is in the mixed messages it contains about sexual morality among Christians. Merry Anna divorced her husband mainly because he had an affair. She appeared to have definite convictions about sexual fidelity in marriage. When she learns Adam has had many sexual encounters outside of marriage, it seems to be of no concern to her. Adam's attitude toward his sexual sin is disappointing. While he admits he has had his share of women, he claims he has always done the “right” thing, I suppose meaning using condoms. (2464/4158) He never owns up to his sin nor is he ever repentant, even though he is depicted as a Christian. Adam's character is certainly not what I expected nor am pleased about.

Nancy Naigle is a USA Today bestselling author whose many contemporary romance novels include The Shell Collector and the Adams Grove, Boot Creek, and Christmas in Evergreen series. Several of her novels have been adapted to the television screen, airing on Hallmark Channel and Hallmark Movies & Mysteries, including the popular Christmas Joy and The Secret Ingredient. Nancy makes her home in Virginia.
WaterBrook, 336 pages.
I received a complimentary egalley of this book from the publisher. My comments are an independent and honest review. The rest of the copy of this post is from publisher information.