Four Weddings and a Kiss by Brownley, Clopton, Hatcher and Connealy

As this collection of novellas opens, a bunch of cowboy pastors are sitting around a campfire relaxing after revival meetings. A young one voices his concern. He loves a woman, and she loves him, but they are just so unsuited for each other! The other pastors laugh. They'd seen some greatly mismatched couples who had hitched and lived happily ever after. To encourage the young pastor, four of the others tell stories of some of the most unlikely romances one could imagine.

Mary Connealy creates the story of Maizy, a rough and tumble woman who doesn't like dresses or fixing up her hair. Britches are just fine as she helps her pa with ranching. That is until the handsome Rylan buys the ranch next to theirs. When Maizy is at the wrong place at the wrong time, she puts Rylan's life in danger. While Rylan heals from his injuries, Maizy's pa thinks it is a good idea for her to care for the invalid – dressed like a woman is supposed to.

Robin Lee Hatcher gives us the story of Molly, columnist for her father's newspaper in the Wyoming Territory. Her father hires a new editor for the job Molly thought she'd get. When the handsome Jack arrives, sparks fly. She knows that right now it is a man's world, but it won't always be that way. She's bound and determined to show Jack what a woman can do.

Debra Clopton invites us to the world Katie Pearl, a tough Texas rancher who recently lost her pa and their house when a twister went through. Some think she's not quite right in the head after being buried by debris for several days. She's determined to rebuild, all the while fending off the suitors who want her property – at gun point. When a stranger hits town, he promises her he's not the marrying kind so she hires him on the spot. Treb finds out he has quite a challenge before him.

Margaret Brownley takes us to Colorado where Brock, a fancy lawyer from Philadelphia, agrees to defend a woman accused of killing her third husband. (Her first two died under suspicious circumstances too.) Before the end of the first day of trial, Brock realizes he is no match for the kind of law practiced in the wild west. Nor is he a match for the woman who has captured his heart.

You'll enjoy these stories just like that young pastor did. You'll find that God sometimes puts the most unlikely people together – just the way He wants to. The stories are short so the romances go fast but they sure are fun. The authors have done a good job of developing characters, even in these short works. The stories are encouragement to those who find they march to a different drummer. I really enjoyed the collection.

I am participating in a blog tour of this book and you can find other reviews here.

Margaret Brownley has written over thirty novels. Her books have won numerous awards. Happily married, she and her husband have three grown 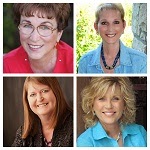 I received a complimentary egalley of this book through Litfuse Publicity for the purpose of an independent and honest review.
Posted by Joan Nienhuis at 4:05 PM