A Violent Hope by Ericka Clay 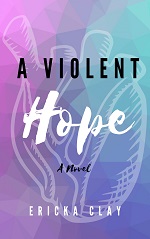 Mack Reynolds is battling his demons. After years spent attempting to heal wounds from being abused as a child, he confronts the author of his nightmares–his uncle–leading to a catastrophic decision and permanently sealing his fate.

When Natalie, Mack’s wife, convinces herself that she won’t be able to support her family on her own, she moves herself and her daughter to White Smoke, Arkansas where she has a new job lined out and the hope of a new beginning. But after being demoted in a mere six months, meeting a less than reputable “best friend,” and chasing the same addiction that helped fuel her husband’s final breakdown, Natalie ends up spiraling out of control and comes out worse the wear ten years later.

All grown up, her daughter, Wren, struggles with her own addiction and a never ending series of tough situations she blames on her father’s early demise. It’s not until Mack’s mother, Rochelle, can confront her past, her questionable living arrangement with her husband and his mistress, and the bitter hurt that’s metastasized inside of her that Natalie and Wren can receive the guidance they both desperately need. But is it too late?

Told through the lives of the three women touched by Mack’s struggle, A Violent Hope takes a deeper look into the human heart and the God who repeatedly heals all wounds.

This is a novel quite unlike any other I have read. The first half of the book and the Epilogue are from God's perspective. I really liked how realistic events are portrayed in these sections with a whisper of God here and His hand on a shoulder there. This part of the novel was very touching. The second half of the novel switched viewpoints of the three major women involved in the story. I found the frequent change of viewpoint a little disconcerting. I was not as impressed with this second half of the book as I was the first half.

This is a gutsy novel. Clay doesn't pull any punches on what characters experience or what they are thinking. It is not a cozy or nothing-bad-happens kind of novel. But it does show that very harmful events are used by God in the end. It shows too that very broken people can be healed by God. Just be prepared to read of the harmful events and experience the brokenness of people.

Much of the novel deals with raw and strong emotions, sometimes hatred or disgust toward others. Because of that, I recommend it to readers who are mature in their understanding of God and how He can work in even the worst of situations. Sensitive readers may find the material too intense.

Ericka Clay is the author of four previous novels, a book of short stories and poetry. She graduated from the University of Arkansas creative writing program. She has been awarded a number of times by Writer's Digest for various short fiction pieces and has taught writing classes and holding writers' workshops in the South Texas area. She lives in Northwest Arkansas with her husband and daughter. You can find out more at https://erickaclay.com/.

I received a complimentary digital copy of this book from the author. My comments are an independent and honest review. The book synopsis was provided by the author.

Posted by Joan Nienhuis at 3:50 PM