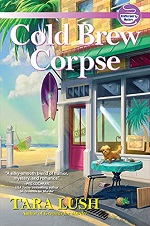 This is another entertaining cozy mystery for coffee lovers. While it is the second in a series, it reads rather well on its own. I did review the first in the series and you can read it at Grounds For Murder.

I like the heroine. She had been a journalist in Miami but was now managing the coffee shop for her father. Her journalistic side comes out when the owner of the yoga studio next to the coffee shop goes missing and is then found murdered.

The murdered yoga instructor was popular with her flashy techniques but she was disliked by many. The suspect list is large. I was surprised at the culprit in the end as I am not sure there was much foreshadowing. Information was revealed late that would have helped us figure out who it was.

This is an entertaining cozy mystery set in an interesting location. Coffee and yoga lovers will find much to like. There is nothing amazing about Lush's writing style but the novel was a good and fun read overall. Unfortunately, there were no coffee recipes in the ARC I read. I would have liked to know how to make cold brew.

Tara Lush is a Florida based novelist and journalist. She is an RWA Rita finalist, an Amtrak writing fellow and the winner of the George C. Polk award for environmental journalism. She has been a reporter for The Associated Press for the last decade. She also writes contemporary romance set in tropical locations. She lives on the Gulf coast with her husband and two dogs. You can find out more at https://taralush.com/.

Posted by Joan Nienhuis at 5:02 PM