A Good Day for Chardonnay by Darynda Jones 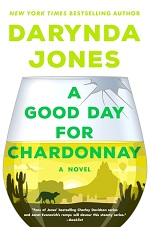 Running a small-town police force in the mountains of New Mexico should be a smooth, carefree kind of job. Sadly, full-time Sheriff—and even fuller-time coffee guzzler—Sunshine Vicram, didn’t get that memo. All Sunshine really wants is one easy-going day. You know, the kind that starts with coffee and a donut (or three) and ends with take-out pizza and a glass of chardonnay (or seven). Turns out, that’s about as easy as switching to decaf. (What kind of people do that? And who hurt them?)Before she can say iced mocha latte, Sunny’s got a bar fight gone bad, a teenage daughter hunting a serial killer and, oh yes, the still unresolved mystery of her own abduction years prior. All evidence points to a local distiller, a dangerous bad boy named Levi Ravinder, but Sun knows he’s not the villain of her story. Still, perhaps beneath it all, he possesses the keys to her disappearance. At the very least, beneath it all, he possesses a serious set of abs. She’s seen it. Once. Accidentally. Between policing a town her hunky chief deputy calls four cents short of a nickel, that pesky crush she has on Levi which seems to grow exponentially every day, and an irascible raccoon that just doesn’t know when to quit, Sunny’s life is about to rocket to a whole new level of crazy. Yep, definitely a good day for chardonnay.

I really like Jones' writing. She has great dialogue with snappy comments and comebacks. She has great humor that made me laugh. There is a good balance of character thought and development and suspenseful situations. I like Sunshine as a character and was happy to see more about her abduction revealed in this book. The plot is a little complex but that is because there is so much going on in Sheriff Sunshine's life. Her daughter is a pistol and adds lots of fun to the novel. Family relationships plays a big part in this novel, both good, on Sunshine's part, and not so good, on the Ravinder family part. And what an interesting and surprising twist at the end.

The only aspect of this novel I did not like and felt marred an otherwise great novel was the very graphic sex scene near the end. And I mean graphic. While it had a part in Sunshine's character development, I'm of the old school where I find allusion much more interesting and appropriate than graphic description.

Other than the graphic sex scene, this is a very enjoyable and entertaining book. I hope there are more planned for the series as I'll be watching for them.

You can read my review of the first book in this series, A Bad Day for Sunshine.

New York Time and USA Today bestselling author Darynda Jones has won numerous awards for her work, including a RITA, a Golden Heart, and a Daphne du Maurier, and her books have been translated into 17 languages. She penned the international bestselling Charley Davidson series and is currently working on several projects, including the Sunshine Vicram Mystery series and the Betwixt and Between series of paranormal women's fiction. She lives in New Mexico with her husband and two sons. Photo by Donita Massey.

Posted by Joan Nienhuis at 3:44 PM