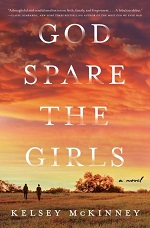 I enjoyed reading this thought provoking novel that is an important commentary on this time in Christian culture. We've read of pastors admitting to unfaithfulness. McKinney explores what that means to a pastor's family, especially his daughters.

This novel is not a page turner. It is rather a methodical look at how a family deals with sin. Luke, a popular pastor known far and wide for his teen abstinence ministry is himself caught having an affair. I was amazed at how McKinney took us through the reactions of his daughters, his wife, and the church at which he was a pastor. Having been raised in an evangelical church, though in the north, not Texas, I have to say McKinney is spot on.

There is much to think about in this novel. There were times I wanted to hug the troubled daughters. There were other times I wanted to slap the super spiritual mother. And I grieved over the arrogance and pride and lack of repentance and so much more. Unfortunately, how McKinney portrayed the situation is all too often true

This is a good debut effort. I like the thoughtful exploration of sin and its effects. McKinney's writing style is good although this novel did feel slow in development. And the ending, well, was just too abrupt and did not tie up the loose ends.

Kelsey McKinney is a freelance and features writer and cofounder of Defector Media. She previously worked as a staff writer at Vox, Fusion, and Deadspin. Her writing has appeared in several major magazines and other publications. Raised evangelical in North Texas, she now lives in Washington, DC, with her husband. God Spare the Girls is her first novel. Photo by Emilio Madrid.

Posted by Joan Nienhuis at 6:54 AM