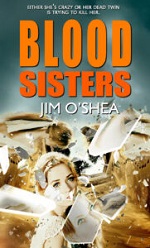 The young Salt Lake City architect is experiencing visions of her twin sister, despite the fact that Melissa died mysteriously almost one year ago.

If that’s not bad enough, a serial killer surfaces in northern Utah, and a series of bizarre clues lead Detective Troy Hunter to Libby…and unspeakable possibilities that begin to shatter her fragile world.

Wow. This book was full of suspense. I found myself captured by it, reading way too late to finish it. I just had to know how it ended. It is a psychological thriller with lots of twists. O'Shea's writing style is captivating and kept me reading.

There were two issues I had with the book. It starts out following two separate narratives that do combine a ways into the book. At the beginning, however, the separate narratives are not identified and it would take me a paragraph or two before I understood the narrative had changed. The second issue is the ending. I like it when the killer is revealed and I think, ah, I should have seen that as there were clues. I don't like it when the killer sort of comes as a surprise, not being hinted at. That's what happens here.

Even though I felt there were minor flaws in the book, the compelling nature of the writing and the psychological suspense over powered any defects. I am really impressed there can be a very good Christian psychological thriller novel. I'll be watching for more from this author.

I received a complimentary digital copy of this book through Celebrate Lit. My comments are an independent and honest review.

The author of two previous highly-rated thrillers (The Linen God and The Reluctant Disciple), Jim O’Shea spends his time crafting novels of suspense that frequently tackle the dynamic between faith and science. Jim believes God continues to reveal his creation masterpiece through scientific discovery, and that Christian fiction is a great tool to expose those emerging truths.

His third novel, “Blood Sisters”, is also very highly rated on Amazon but takes a more traditional approach to mystery/thrillers with a mind-bending whodunit in the tradition of Agatha Christie. His fourth novel, “The Beacon”, will return to his faith/science roots and feature a compelling blend of espionage, leading-edge science, and salvation.

I’m fascinated by science in general, but more specifically by discoveries over the past hundred years that point directly to a Creator and His creation. The new findings fly in the face of mainstream physics which suggests matter and energy make up everything in our universe and that all things, including our consciousness or soul, are direct results of their interactions.

Fortunately, humankind’s advancements in physics, cosmology, quantum mechanics, biology, etc. point directly to the fact that the universe had an actual beginning as claimed in the Bible and our existence can not be explained by natural processes such as evolution. This should be a great comfort to every Christian, and my writing often tries to take these emerging truths and wrap them up into page-turning stories that provide the reader not with just a thrill ride, but also a glimpse into God’s glory!

For Him and My Family, July 8

Because I said so -- and other adventures in Parenting, July 12

Posted by Joan Nienhuis at 6:22 AM

Thank you for sharing the review.