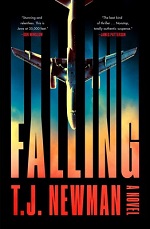 Put your seat belt on. This novel is a suspenseful ride. Just make sure not to read it before that vacation flight, or worse, while you're flying.

Newman has crafted a tight thriller. We are provided with intense action balanced with character background and development. The combination works well. I really like how the flight personnel work together, forming ideas and taking action with what they have. The tension mounts to an incredible level as we wonder if a horrible disaster can be prevented. And, just when we think there is hope, another twist in the plot shakes our expectations.

I really like Theo. What a great FBI agent, willing to risk his career to do the right thing. I am amazed, though, at the destruction he caused while doing so. And Jo is another favorite, flight attendant willing to risk her life to save others. Bill, the pilot, while heroic, is a bit reduced in character since he is stuck in the cockpit. His strength had to be calmness in the face is potential disaster.

The only problem I had with this novel is one of my pet peeves. Newman begins the novel with a suspenseful scene which turns out to be a dream, not initially informing readers. I don't like it when authors build suspense by fooling the reader, so to speak.

Besides being a good thriller, this novel is informative about how a foreign person might feel betrayed by the U.S. This aspect of the novel will give readers much to think about regarding the U.S. involvement, or lack of it, in tragic, foreign situations.

This novel is one continuous adventure in suspense and an amazing debut effort. Don't hold your breath because, just when you think it's safe to breath, it isn't.

T J Newman, a former bookseller turned flight attendant, worked for Virgin America and Alaska Airlines from 2011 to 2021. She wrote much of Falling on cross-country red-eye flights while her passengers were asleep. She lives in Phoenix, Arizona. Falling is her first novel. Photo credit: Melissa Young.

Posted by Joan Nienhuis at 6:54 PM