The Hive by Gregg Olsen 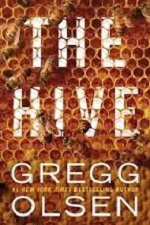 I have mixed feelings about this novel. The plot is intriguing and suitable for the historical aspect of the novel set in the late 1990s. A women who attracts other women with her life changing attitude and bee oriented beauty products. Some leave their families to live on the farm compound. Some swear their allegiance to the cunning female guru. The contemporary aspect of the novel begins with the discovery of a murdered women. Soon other deaths are being investigated. The truth is revealed slowly through current investigations and flashback scenes.

My favorite aspect of this novel is its location, northwest Washington State. It's a location with which I am well familiar, an area native and resident. It was fun to read about small towns I've been to. Where else would one read about the scenic Chuckanut Drive, Orcas Island, or Mt. Baker?

But there were aspects of the novel I didn't like. One was its length. It is just too long. The investigation centers on uncovering the truth about the six women involved in the early business formation, the guru and five devotees. That was too many. Three devotees would have produced a more manageable plot. Yes, it all comes together near the end, but there was just too much of it.

The other aspect of the novel I did not like was jumping around to different time periods. While most of the time jumps are clearly marked at the beginning of the chapter, there were time jumps within chapters too. A current character will mention a new feature and three dots and we're back twenty years.

This is the first novel I have read by Olsen. I like his writing style and the way information was revealed as the novel progressed. There were enough twists and turns to keep me reading, even though the plot seemed to go on forever. I like what I have read well enough that I am going to go back and read his earlier novels.

Gregg Olsen is the bestselling author of true crime and novels of suspense. He has appeared on a number of media outlets and his books have topped sales charts. Olsen lives in rural Washington State. You can find out more at https://www.notorioususa.com/.

Posted by Joan Nienhuis at 5:06 PM