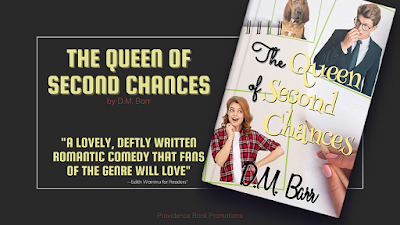 The Queen of Second Chances 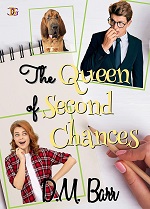 Carra’s memoir-writing class teaches seniors to resolve the regrets of their past. But to win over elder attorney Jay, will she follow her own advice? Carraway (Carra) Quinn is a free-spirited English major confronting an unreceptive job market. Desperate for cash, she reluctantly agrees to her realtor stepmother’s marketing scheme: infiltrate a local senior center as a recreational aide, ingratiate herself with the members, and convince them to sell their homes. Jay Prentiss is a straitlaced, overprotective elder attorney whose beloved but mentally fragile Nana attends that center. More creative than mercenary, Carra convinces Jay to finance innovations to the Center’s antiquated programming. Her ingenuity injects new enthusiasm among the seniors, inspiring them to confront and reverse the regrets of their past. An unlikely romance develops. But when Carra’s memoir-writing class prompts Jay’s Nana to skip town in search of a lost love, the two take off on a cross-country, soul-searching chase that will either deepen their relationship or tear them apart forever.

Charming, funny, and heartwarming, The Queen of Second Chances is not just a love story where two people discover each other, it is a story of self-discovery. Like all good romances, this one starts with the two main characters loathing each other before slowly realizing that they are perfect together. But before either Jay or Carra can come to that realization, they have to work through their personal shortcomings. Carra feels like a failure and is unable to get past her mother's desertion of her as a child. Jay, while his helping people who desperately need rescuing demonstrates his fundamental goodness, puts a little too much emphasis on wealth and status. Helping a group of seniors find fulfillment is the catalyst that allows both the main characters to embrace changing their own lives and then ultimately embrace each other. A joy to read, The Queen of Second Chances is the perfect mood lifter in these stressful times.

The Queen of Second Chances by D.M. Barr is a beautifully written story of two lost souls brought together by fate. Carra was such a wonderful character, her warmth and kindness towards others were admirable. She also put others' needs before her own safety and this was highlighted during the car scene outside the Garrison house. She was perfectly matched to Jay. Although he seemed to enjoy a materialistic lifestyle, I feel he had a really good heart and when he met Carra, he found the missing piece in his life. My absolute favorite character was Helen; she was extremely insightful and wise even though she was suffering from the onset of dementia. Her words of wisdom throughout were poignant and powerful, especially her views on looking back in life: "It's more important to heed the present because that's what it is, a gift. Nothing lasts long in this life, which is why every moment matters. You can't take anything or anyone for granted." I found the relationship between Jay and Carra developed gradually and the dialogue exchanges between them were very realistic. I loved the twist towards the end concerning Jay's background and the nail-biting ending was brilliant. I feel there are so many underlying messages throughout too. For example, live for the moment, never be afraid to chase your dreams, and forgive yourself for mistakes you have made in your past. I highly recommend this novel.

The Queen of Second Chances by D.M. Barr is a lovely, deftly written romantic comedy that fans of the genre will love.

I don't usually read in the romantic comedy genre but I'm glad I caught this one. It is fun. The characters are enjoyable and the plot informative. As a septuagenarian myself, I was happy to see Carra bring some life into a place where the elderly gather. It was good to read about people dealing with regrets, opportunities they let go. It was good to experience Carra's own growth in that area and see Jay come to his senses.

This is a good, light novel that is fun to read, especially if you are a bit older and believe in second chances at life.

By day, a mild-mannered salesperson, wife, mother, rescuer of senior shelter dogs, competitive trivia player and author groupie, happily living just north of New York City. By night, an author of sex, suspense and satire. My background includes stints in travel marketing, travel journalism, meeting planning, public relations and real estate. I was, for a long and happy time, an award-winning magazine writer and editor. Then kids happened. And I needed to actually make money. Now they're off doing whatever it is they do (of which I have no idea since they won't friend me on Facebook) and I can spend my spare time weaving tales of debauchery and whatever else tickles my fancy. The main thing to remember about my work is that I am NOT one of my characters. For example, as a real estate broker, I've never played Bondage Bingo in one of my empty listings or offed anyone at my local diet clinic. And I haven't run away from home in fear that my husband was planning to off me. But that's not to say that I haven't wanted to…

Click here to view those on the blog tour of The Queen of Second Chances by D.M. Barr .

Wow! Real nice review! I also read this book and loved it. I loved your thought that it was a book about self-discovery - totally agree! It was not just a fun love story - it was so much more!