The Nature of Small Birds by Susie Finkbeiner 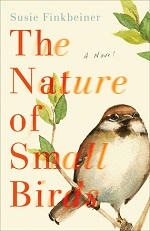 In 1975, three thousand children were airlifted out of Saigon to be adopted into Western homes. When one of those children announces her plans to return to Vietnam to find her birth mother, her loving adopted family is suddenly thrown back to the events surrounding her unconventional arrival in their lives.

Mindy's father grapples with the tension between holding on tightly and letting her daughter spread her wings. Her mother undergoes the emotional roller coaster inherent in the adoption of a child from a war-torn country, discovering the joy hidden among the difficulties. And Mindy and her sister struggle to find the strength to accept each other as they both discover who they truly are.

Told through three distinct voices in three compelling timelines, The Nature of Small Birds is a hopeful story that explores the meaning of family far beyond genetic code.

I have mixed feelings about this novel. On the positive side, Finkbeiner is a great writer. She knows how to frame a scene, create good dialogue, and really draw the reader into the feelings the characters are experiencing. I really appreciate the exploration of Operation Babylift. While I remember the Vietnam War, I had forgotten about the children brought to America at the end of it.

I felt that way of conveying the story was disorienting. I was confused at first as characters are addressed by different names in the three points of view and finally decided to make a family tree. That helped me when Linda spoke of Ivan while Sonny said Grumpy and Bruce addressed him as dad. Also, the narrative rotated, 1975, 1988, then 2013 and then back around again. There are forty-nine of these period vignettes. Just when I was really getting into one part of the story it would go to an entirely different time period and character focus.

Because of the structure of the novel, I felt the character development was lacking. A full length novel allows a character to be developed well. Here, each character had about a third of the novel so did not have the space to be developed well. And my greatest disappointment was so much missing from Minh's story after adoption. For example, the novel opens in 2013, from Bruce's point of view, and Minh is coming back home in the process of a divorce. We really don't get any more information about it, about her husband, etc. In that respect, Minh's character is hardly developed at all. We do get some ideas about Linda and Bruce and Sonny but we really have very little about Minh's character, the one at the center of it all.

This novel is an exploration of a family adopting a child from a different country. It's told in bits and pieces. We find out about 1975, the year Minh came, 1988, Sonny's high school graduation year, and 2013, the present time. Much else is missing.

Susie Finkbeiner is the CBA bestselling author of All Manner of Things, which was selected as a 2020 Michigan Notable Book, and Stories That Bind Us, as well as A Cup of Dust. She serves on the Fiction Readers Summit planning committee, volunteers her time at Ada Bible Church in Grand Rapids, Michigan, and speaks at retreats and women's events across the country. She and her husband have three children and live in West Michigan. Photo Credit: Bree Rose Photos.

Posted by Joan Nienhuis at 7:21 PM