The Time Has Come by Laurence O'Bryan 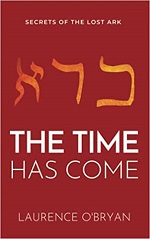 Rachel Davis, a troubled archaeologist, invites colleagues to visit a dig at Mount Sinai in Egypt, where many believe the ark was created. She’s found something buried deep in the copper mines that riddle the mountain.

Then an earthquake strikes leaving her trapped under ground.

Devlin Lang, a brilliant app developer has an app that uses super-fast quantum computing. He used to work for the U.S. military. They want him back to stop an out-of-control energy experiment.

Devlin is also funding a dig in Ireland. He needs Rachel to interpret some ancient Hebrew writing they’ve found.

This is an interesting novel about events today and those possible in the near future. It features two main characters, their lives intersecting in a suspenseful search for the Ark of the Covenant. There is an emphasis on the many volcanoes and earthquakes happening today and suspense from experiencing them. There is also a world destroying potential when an advanced science experiment goes wrong.

O'Bryan writes the adventures of Rachel and Devlin from their first person points of view. When neither one is present, it is from a narrator's point of view. I found that writing style a little confusing. O'Bryan does identify each chapter's location so readers know which character's experiences are being represented. I still found that writing style less satisfying than having the entire novel from a narrator's point of view. The Epilogue was written as from a narrator, when both Rachel and Devlin were together, showing the difficulty of the first person technique when two are present.

I like to learn something when I read a novel and in this case it included a legend about the biblical character Jeremiah. I had no idea there was a legend that Jeremiah took the Ark of the Covenant to Ireland after the Babylonians destroyed Jerusalem. O'Bryan also includes links to explain the advanced physics mentioned, such as the Casimir force and time dilation.

The novel does have some plot defects, such as a sudden and unidentified fix to a potential disaster after repeated and suspenseful earlier attempts had failed. Also, O'Bryan took great liberty in emphasizing the volcanoes and earthquakes. He mentions the eruption of Mt. St. Helens as if it is a current event when it happened 40 years ago. I also felt the main issues in the novel were not resolved sufficiently, perhaps an indication of a sequel.

This is an entertaining novel about current events possibly marking the end times.

Laurence O'Bryan grew up in Northern Ireland, went to school in Dublin, studied at Oxford, and worked in IT marketing for 25 years, much of that time in London. He was first published by a school newspaper when he was ten and is currently the author of several novels. You can find out more at https://lpobryan.com/.