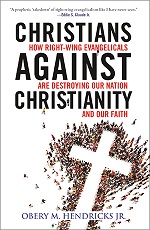 Hendricks is not shy in this scathing evaluation of right-wing evangelical Christianity. Lest we be unclear as to his feelings, he freely expresses his horror at what Christianity in America has become at the hands of the loud right-wing voices. A travesty, he writes. A mockery of the Gospel of Jesus Christ. (35/2935)

Hendricks writes as a faithful believer in the gospel. He centers his book on the importance of the biblical values he sees at the core of our gospel witness: the command to love your neighbor as yourself and Jesus' parable of the sheep and goats. He reminds us how the teachings of Jesus can be ignored when there is a quest for political dominance. He reminds us of the many commands for social justice in the Old Testament. (Read Jeremiah 22:16, for example.)

Evangelicals will no doubt be offended at Hendricks' call for humane treatment of same sex couples and reminding them of the biblical commands to extend hospitality to immigrants. And his exploration of abortion, specifically his review of Numbers 5:27, may shock some.

This book is certainly worth every evangelical's attention. Hendricks clearly distinguishes biblical Christianity from the right-wing Christianity we see in America today. He reveals the ties to the NRA and big business, and how right-wing evangelicals are promoting their agendas. He exposes their greater concern for protecting wealth than for helping those in need.

This book is eye opening and disturbing. Hendricks suggests there is a spirit of antichrist today that has allowed the ungodly assaults on the peace and well-being of American society. He hopes right-wing evangelicals will admit to and repent of the political and moral carnage they have helped wreak and evidence a return to biblical Christianity.

Obery M Hendricks Jr. is a best-selling author, an activist, a religious scholar, a former theological seminary president, and an ordained elder in the African Methodist Episcopal Church. He currently teaches religion and African American studies at Columbia University and is also a Visiting Professor of Bible and Ethics at Union Theological Seminary in New York City.