A Hex for Danger by Esme Addison 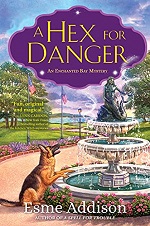 This is an interesting cozy mystery with a magical twist. I had never heard of the Mermaid of Warsaw before and the myth surrounding it. It was interesting to see how Addison wove a good murder plot around the mythology, including people descended from the mermaid. The characters were good but I did have a little trouble liking Alex.

While magic is a bit out of my preferred reading style, I did find this mystery informative and interesting. I liked that the magical people of Bellamy Bay were reluctant to use their powers and when they did, generally it was either for the welfare of others or for protection. I liked the sort of back and forth about whether the mythology and the magic associated with it was real. There was also a battle of good and evil in this magical world as there are bad guys descended from a dragon. Which magic will win?

This is the second in a series but I felt it read well on its own. It is a fun cozy mystery for readers who like a little magic and mythology with their murder.

Esme Addison is the mother of three boys and a technical writer and editor who writes fiction in her spare time. Originally from Raleigh, NC, she traveled a great deal as a military spouse. Married to a first-generation Polish family, she blogs about elements of Polish history and culture. You can find out more at https://esmeaddison.com/.

I received a complimentary egally of this book from the publisher. My comments are an independent and honest review.

Posted by Joan Nienhuis at 6:44 PM