The Die is Cast by Heights and Woodhouse 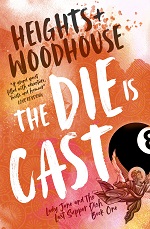 This is a novel of imaginative style that did not work so well for me. The authors have created an alternative world where people are fascinated with the Last Supper Dish. The Vatican claims to have it but Dishers believe the Vatican is lying and the true Dish has yet to be found. Theories abound based on riddles from discovered icons. There are characters galore in the novel, including people from the Vatican, from Orthodox Christianity, Ray and Natalie, a recently reunited couple planning to film a documentary on the Dish, Burke, archaeologist who believes he can find the secret to locating the Dish, Jane, heir to a multi-million dollar empire who has a strange dog and is a devout Disher, and a few more quirky characters thrown in for good measure. The narrative moves from location to location, character to character.

First of all, the book is just too long. Much of the story, such as interactions between Ray and Natalie, seem to be filler and really do not move the basic plot forward. Yes, there are some interesting exchanges and some humor, but, in general, much of the material in the book did not drive the plot. There is even one scene repeated verbatim, one time remembered by Ray and then again as remembered by Natalie. At one point, “Ray had no clue what she was talking about.” (2088/7652) I have to admit I felt like Ray too.

The novel got off to a rough start for me by introducing the main characters with vignettes from their locations. I found it hard to be interested in these people until I understood, much later, how they were related to the central plot. There were allusions to previous actions that made me wonder if I had missed an earlier book in the series.

There is much in the book about the Vatican and the Orthodox Church and the various troubles between the two. While that information seemed very interesting, the authors did not include a note to let me know if any of that was based on actual history or if it was fiction. And the typeset in the digital edition I read was terrible.

I give points to the authors for creating an imaginative book. Unfortunately, there was not enough action driving the plot to keep my interest. And the book just ends without being resolved. Quite an accomplishment to write a book this long that left me hanging. I don't think I pick up the sequel.

Heights and Woodhouse met during their doctoral studies in literature. Heights got his degree in American literature; Woodhouse got hers in British. Completing their studies took much planning. Falling in love and getting married, however, was unexpected. The rigors of university teaching threatened to draw them apart. Their solution was writing a novel together. That the solution worked was also unexpected, since he demanded an action novel; she insisted on romance. That they finished their novel was really unexpected! You can find out more at heightsandwoodhouse.com.

I received a complimentary digital copy of this book through BookSirens. My comments are an independent and honest review.

Posted by Joan Nienhuis at 2:56 PM