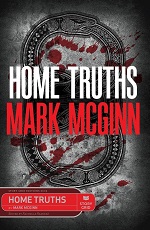 Detective Sergeant Jonah Solomon is used to navigating the ruins of Christchurch, New Zealand, a city nowhere near recovery more than a year after a devastating earthquake. He’s also used to navigating the prejudice that keeps plenty of doors closed to Maori officers like him. Most of his colleagues think Jonah’s responsible for letting ex-cop-turned-con artist Rachel Trix escape justice with barely a slap on the wrist. He’s got a resignation letter in his desk drawer, signed and ready, should anyone ask.

With a credible new tip on Trix’s exit plan, Jonah has one more chance to make things right—until an ambush turns the operation into a bloody nightmare. He is immediately shaken by aftershocks that reveal lies and corruption at every level of the police force. With fewer and fewer people he can trust, a complex web of secrets puts Jonah and his family at the mercy of ruthless criminals. Can he finally reveal the truths he’s protected since childhood in order to save himself and the people he loves most?

This is a police investigation novel with a slow and methodical pace. There are little snippets of action and suspense here and there but the novel is mostly personal interaction, such as dialogue between enforcement personnel and how various people on the force exercise power and interact with others. Much of the plot revolves around less than honest members of the police force so what is said and claimed and revealed in the saying is important. The plot itself is quite complex, involving a past earthquake and possible fraud in making claims and possible fraud in paying out claims. It seems there might be some on the police force complicit.

There were aspects of the novel I did not like. There is no initial setting and I had no idea where the initial action was taking place. There are no descriptions of landscapes that helped ground what action there was. It was not until 6% into the book that Christchurch is mentioned. The main character is a policeman but his description is so lacking that I did not understand until 10% into the book he was Maori.

I had trouble following the dialogue. Some of that, I am sure, is because of the New Zealand location. Many colloquial words are used and this American had no idea what they meant. A neighborhood was “redded” (1341/4570) and walking out of a tense discussion was not “flash.” (774/4570) And then there was the incessant use of “boss” in dialogue. I find it hard to believe an underling would say the word three times in three successive sentences in a dialogue (2382/4570) and twice in a three sentence paragraph. (2534/4570) I find it hard to believe people actually talk that way.

I found it hard to like Jonah, the hero and detective trying to unravel the earthquake insurance issues as well as find a past police woman gone bad as well as deal with his troubled relationship with his gay lover. He is just downright mean to his emotionally and mentally wounded sister. And he is not a very good investigator, deleting unread emails with important information for his case because he thought they were about something else (2490/4570) and driving through a red light because he is emotional. (1396/4570) Yes, he is a flawed hero with lots of baggage but he seems to be weighted by it rather than rising above it.

This novel is supposed to follow the Story Grid method. While it may conform to the necessary elements, this was a slow read for me. I felt like it was going on and on with no exciting turning points in the plot. All of the various aspects of the plot parts did come together in the end, along with suspense, however, and I did learn some of how insurance scams can be done which was interesting.

During a lengthy career as a court registrar and manager in the New Zealand justice system, Mark McGinn had the privilege of assisting some of thee finest lawyers and judges in action. Both that experience and his behavioral assessment work in staff recruitment and development have enriched and driven his writing of crime stories and thrillers. He is also a Story Grid Certified Editor specializing in crime stories.

I received a complimentary digital copy of this book from the publisher. My comments are an independent and honest review. The book and author description provided by the publisher.

Posted by Joan Nienhuis at 7:08 AM