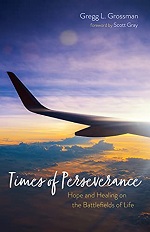 This is a memoir with spiritual lessons learned from experiences. Grossman was raised a Reform Jew in Queens, New York. Even as a young Jewish man, he sought God and records how God strategically placed people in his path. He writes of his time living in a kibbutz in Israel, his struggles with college back in the U.S., his brother being in a very serious automobile accident, finishing college with academic success, hearing and accepting the gospel, being hit by a car while jogging, and attending seminary. Grossman includes journal entries on occasion to show his emotional reactions to some of his life events. He includes life lessons from his experiences at the end of each chapter.

Grossman's memoir would have benefited from additional editing. He repeats himself, such as saying his parents divorced when he was nine years old. (159/1758, 178/1758) Some of the photos included are upside down. Some aspects of the memoir are given with more detail than is necessary. He draws much of his spiritual lessons from sermons he has heard and the books he has read.

Grossman says the purpose of his book is to show how God uses mistakes and accidents in our lives to His glory. (138/1758) He shares how God forgave and restored him. There is a very clear presentation of the gospel included. The book is an example of an emotional Jewish man coming to faith in Jesus Christ as well as surmounting many of life's hardships. It is an example for others who desire to write about their life experiences in the context of spiritual lessons.

Gregg L Grossman was born in New York City and raised in Queens. He received a BS in communications from Norwich University and graduate credits from Nova Southeastern University and Dallas Theological Seminary. He has spent twenty-four years in sales and marketing. He earned his MDiv and a PhD from Trinity Theological Seminary. He currently works in the Dallas Division as a bivocational workplace chaplain for Marketplace Chaplains. He also teaches as an adjunct professor at Louisiana Baptist University and Seminary. He is the president of Beyond Perseverance LLC, a Christian life coaching company.

Resource Publications (an imprint of Wipf and Stock), 164 pages.

I received a complimentary digital copy of this book through SBCGlobal. My comments are an independent and honest review.