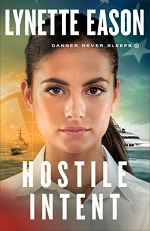 Secrets are about to be revealed . . . but will the guilty be brought to justice?

Ava Jackson entered the military shortly after high school, but her mother's illness has forced her to request an early discharge. She already lost her father while deployed, and there's no way she's going to let her mother die alone. But after a visit to the nursing facility where her mother lives, Ava is attacked walking back to her car. Fortunately, FBI Special Agent Caden Denning arrives in time to help fight off her attacker.

Caden reveals to Ava that she may hold the key to the murders of three families, and he needs her help before anyone else is harmed. The hits show a pattern, and clearly the killer has an agenda. But if Caden and Ava can't discover what it is, Ava may be the next on the hit list.

This is another great Christian romantic suspense novel from Eason. The action is nearly continuous. The suspense is balanced well with character thought and personality development. The plot is complex but works well. The current murders are based on actions from years ago. That fact keeps hidden crucial information needed to stop the murders until it's almost too late.

I like the addition of family relationships to the plot structure. Ava is loyal to her father's memory and insists on being part of the investigation into her father's potential role in the current murders. The murderer is also loyal to family but with deadly consequences. Eason presents readers with a real contrast in what family loyalty can mean.

I liked Ava as a heroin. She is a strong and capable woman. She may make a wrong decision from time to time but she has the intelligence and strength to make it through dangerous situations. I am always a bit surprised when an author has an FBI agent develop romantic feelings for someone involved in his investigative responsibility but it works in this situation.

This is a good novel for readers who like lots of suspense with a capable heroine at the center of it all.

Lynette Eason is thee bestselling author of the Danger Never Sleeps, Blue Justice, Women of Justice, Deadly Reunions, Hidden Identity, and Elite Guardian series. She is the winner of three ACFW Carol Awards, the Selah Award, and the Inspirational Reader's Choice Award, among others. She is a graduate of the University of South Carolina and has a master's degree in education from Converse College. Eason lives in South Carolina with her husband and their two children. You can find out more at www.lynetteeason.com. Photo (c) Mary Denman.

This is a series that I really need to catch up on!!!