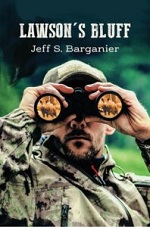 Terrorists attempt a multi-million-dollar art heist while America’s media distracts the world with stories of Alabama hunters slaughtering hogs with dogs and knives. As fearless Jack Lawson is about to catch his thousandth boar, journalist Carla Frederick arrives to cover the hunt for the LA World News. Shocked by the uncivilized Alabamians with their bulldogs and razor-sharp knives, Frederick writes a grotesque, biased story about Jack that goes viral. Belatedly, she discovers the deeper story—deeper and darker than she could have ever known. Barganier has written an unlikely love story wrapped in twisting suspense.

I have mixed feelings about this novel. On the positive side, Barganier has crafted a clever novel pointing out the absurdity of pig loving liberals while advocating feral pig killing conservatives. He has drawn his characters well. There is some romance and some good humor. (I love how the town planned to benefit from all the liberal protester ruckus.) There is a clear gospel message included. There are good allusions to the end times, the antichrist and the forces of spiritual darkness.

On the negative side, there were a couple of issues I had with the book. One is a pet peeve, starting a chapter with a dream and not telling the reader until the suspense is intense. Barganier did this at the beginning of Chapter 3. I feel it is a deceptive way to get a reader emotionally involved.

It seemed to me the novel had a definite political bent and that a major purpose of the novel was to present a certain political view. Jack and his father make many critical statements about the Left and about the misleading media. Carla, a journalist, says of the media, “We have little regard for truth or objectivity.” (1311/2992) Barganier says one of the reasons he wrote this novel was because of the lies the Dark State controlled media tell. (2953/2992) Unfortunately, he falls pray to his own criticism.

One statement Jack makes, regarding rats and Washington, DC, is just not true. Jack says it is against the law to kill rats in that city, that they must be relocated. (601/2992) Yes, a controversial law was enacted a decade ago but only applied to “wild” animals. The law exempted “commensal rodents” that live in houses, live off humans, usually identified as rats and mice. Sorry Jack, you lied Carla. You can kill rats in Washington, DC. Yes, this is fiction, but I think an author still needs to get his facts right. (wtop.com, “Oh, rats: Who's right about D.C.'s rodent law?” January 18, 2012 article, accessed 8/11/2021)

This is an entertaining novel that is well written but has a clear political agenda. It is a good example of showing how a novel can present a particular political viewpoint through the words and actions of characters. Barganier is a clever writer. The use of pigs representing evil people is well done. Even the giant hog goes into a “deep state” of darkness in the forest. (1399/2992) Except for the serious misrepresentation of the truth I mentioned above, this is an engaging novel. Just be aware of the political agenda it presents.

A former securities broker turned writer/designer, Barganier travels far and wide upon the slightest excuse for something interesting to write about. He’s published four books and his articles on a wide variety of subjects have appeared in newspapers, magazines and on blogs. He’s travel editor for BOOM! Magazine.

I didn’t “come up” with the idea for Lawson’s Bluff. The idea found me after I published a piece about a hunter in Georgia who hunts wild boars with dogs and a knife. Like character Jack Lawson, he never carries a gun, preferring, instead, to tackle the hog and slay it the old-fashioned way. So, as with previous novels, I didn’t write this one either. The story wrote me. I had no clue where the story was going until informed … by the story. This approach is what makes life interesting, I think. And what makes novels interesting, too—twisting action and romance in unpredictable settings.

For Him and My Family, August 17

Because I said so -- and other adventures in Parenting, August 21

Posted by Joan Nienhuis at 5:54 AM

Interesting review, thank you for sharing.

Thank you for sharing your review! Seems interesting!

This sounds like a great read. Thank you for your review.

Pigs are hunted that way in our area! I, for one, don't have much sympathy with the pigs, since they are so destructive of the wilderness here.

Thank you for sharing. Sounds fascinating.

I am glad you cleared up the rat issue. Because I wouldn't what to even visit Washington if I thought they were allowed to be killed!

I am very excited to read this book very soon!