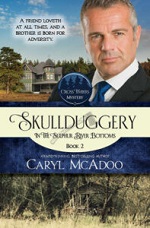 A friend loveth at all times, but a brother is for adversity.

In a decrepit shack on a piece of river bottom property Henry Buckmeyer bought, he finds a human skull with a hatchet embedded in it. Much to Charity Lowell’s delight, her husband  Morgan agrees to co-author a mystery based on the find with dime novelist, May Meriwether, Henty’s wife! After digging into county records and interviewing  locals, plenty of facts are discovered and blanks filled in. A story takes shape, but is the novelists’ narrative what truly happened? It’s hard for Charity not to get in the big middle of the investigation. After two decades, will they be able to learn who the skull belonged to and who left the hatchet behind?

This is an unusual historical novel in that it is a novel about writing a novel. The main characters craft a novel around a recently discovered skeleton, the fellow obviously having been murdered. The bottom layer of the novel follows the two couples who come together to write the novel. As the novel is being written, much of it appears in the text so it is a second fiction layer. In the digital edition I read, there was no formatting difference to distinguish whether I was reading the bottom layer fiction or the second layer. That turned out to be confusing. Adding to the confusion is McAdoo's writing style of giving several dialogue interactions without identifying who is speaking. There were four people in frequent conversation and sometimes I just got lost as to who was saying what.

In general, I found McAdoo's writing style a bit hard to follow. One reason I have mentioned, much dialogue without identifying who is speaking. Sometimes a passage was just not clear. For example, “Sipping her tea, the famous dime novelist sat back in hers as though not very interested.” (267/2419) Sat back in her what? I had to go back two paragraphs to figure out someone else had sat in a chair. I was also a bit disappointed that there was not more description of the initial setting, grounding readers in the novel's location, Texas.

There were several unusual issues in the novel, such as premarital sex and bedding a female slave. I found the Christian aspect of the novel to be quite subtle. It was interesting to see how a true crime novel could be crafted as information became available.

At the end of DUPLICITY At The Lowell House, book one in my new Cross Timbers Mystery series, Henry Buckmeyer travels from Red River County to Dallas to serve as a character witness in the big murder trial.

At a supper with friends in that book, he mentions he and Levi Baylor found a human skull with an ax still embedded in it inside a falling-down shack on some timberland property they bought together.

What starts out as an off-handed comment—merely mentioned for interesting conversation—turns into a great way to unite four of my all-time favorite characters together again for SKULLDUGGERY In The Sulphur River Bottoms!

Charity Lowell (Cross Timbers Romance Family Saga, book four and DUPLICITY) pulls out all the stops to persuade her husband, salivating to investigate and discover whose skull it is and who left the hatchet behind!

She’s got to talk him into first, solving the mystery and second, writing another novel about it! If only she can convince him to collaborate with May Meriwether, Henry’s famous dime novelist wife, things will be perfect! Just imagine!

Poor Morgan. Strong as he is, he cannot tell her no. He never could. So, with an invitation from the Buckmeyers, as much as he hates leaving home and his own bed, he agrees.

My favorite part is having Henry alive again! SKULLDUGGERY is set in 1866, so he’s still got almost twenty years to live!

—It so hurt my heart in COVERING LOVE (book eight in the “Texas Romance Family Saga”) when the patriarch passes to his reward in 1885. I wept while writing his demise then couldn’t get through reading those chapters at our writers’ workshop without crying—

So being able to resurrect his character in the Cross Timbers Mystery DUPLICITY made me so happy! SKULLDUGGERY became the perfect vehicle for me to be joyful again! Plus, I adore joining the characters from both my family sagas into a new story!

I was right up in Morgan’s face with Charity trying to talk him into going to Clarksville and staying a few weeks to investigate and write that book! Yes, he agreed, but he tells her in no uncertain terms, that’s the last one!

For Him and My Family, September 1

I received a complimentary digital copy of this book through Celebrate Lit. My comments are an independent and honest review. The rest of the copy of this post was provided by Celebrate Lit.
(My star ratings: 5-I love it, 4-I like it, 3-It's OK, 2-I don't like it, 1-I hate it.
Posted by Joan Nienhuis at 5:49 AM

What would you say was the hardest scene to write?

A book like this one should be read as a physical copy, maybe.

I love the cover.