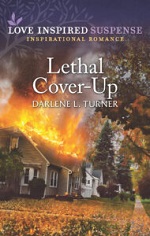 Some secrets are dangerous…

But uncovering the truth could be deadly.

Border patrol officer Madison Steele knows her sister Leah’s fatal car crash was no accident. Someone’s willing to kill to cover up a pharmaceutical company’s deadly crime of distributing tainted drugs. Now they are after Madison to tie off loose ends. But with her high school sweetheart, Canadian police constable Tucker Reed, at her side, can Madison expose the company’s deadly plan before she becomes the next victim?

This novel has nonstop over the top suspense. Unfortunately, much of it is caused by errors and mistakes, a pet peeve of mine. Tucker and Madi go place after place by themselves, each time with a suspenseful result. I wish I had counted how many times Tucker had to dial 911 when he should have had a team with him in the first place. Tucker is not an astute law officer. After Madi made a suggestion, “He snapped his fingers. Why hadn't I thought of that? Another mistake.” (2251/3450) After several attempts on Madi's life, Tucker lets her go off by herself. Of course, suspense ensues. And then he lets it happen again! Tucker thinks, “Another mistake that may cost Madi her life” (2989/3450) In fact, the villain calls Tucker an idiot. (3026/3450) By the time the novel was over, I had little respect or affection for Tucker, he was so incompetent. I like a capable hero that outsmarts the villain, not the other way around.

This is a suspense filled novel with a good gospel message for readers who don't mind an incompetent hero causing most of the continuous suspense.

Darlene L. Turner is an award-winning author and lives with her husband, Jeff in Ontario, Canada. Her love of suspense began when she read her first Nancy Drew book. She’s turned that passion into her writing and believes readers will be captured by her plots, inspired by her strong characters, and moved by her inspirational message. You can connect with Darlene at www.darlenelturner.com where there’s suspense beyond borders.

The Hidden Staircase, The Secret of the Old Clock, The Sign of the Twisted Candles—these were just some of my favorite Nancy Drew books. I couldn’t get enough of them growing up! My family often saw me with my nose stuck in one of Nancy’s many tales. When I was finished with those, I’d sneak my brother’s Hardy Boy books and devour them too. This is where my love of writing and of a good mystery/suspense began.

Creating stories in the romantic suspense genre was a natural journey for me. I had always wanted to be a policewoman after watching Charlie’s Angels (they even kicked butt while wearing high heels…what could be better than that?!), Cagney and Lacey, Police woman, Murder She Wrote, etc. My love for all-things-mystery carried into my adult life. Who doesn’t love Sydney Bristow and Kate Beckett?

I enjoy creating strong female characters in a law enforcement role. Madison Steele fits the bill head on as she works to bring down a ruthless pharmaceutical company. While she has nerves of steel, I also wanted to make her vulnerable. In the beginning Madison loses her long-lost sister in a heart-wrenching crash. One she knows was not an accident. This thrusts her into a deadly pursuit of the perpetrators with her estranged high school sweetheart, Tucker Reed, by her side.

I wrote this book during the tough year our world faced living in the unknown. Madison and Tucker are stuck in their own fears but eventually find hope. Hope in the unknown and hope in knowing God is in control and with us—no matter the circumstances. We just need to know where to look.

I hope you enjoy reading Madison and Tucker’s story as much as I loved crafting it. I’d love to hear from you. You can contact me through my website www.darlenelturner.com and also sign up for Darlene’s Diary newsletter to receive exclusive subscriber giveaways.

She Lives To Read, August 21

For the Love of Literature, August 24

For Him and My Family, August 27

Because I said so -- and other adventures in Parenting, August 28

Little Homeschool on the Prairie , August 30

A Good Book and Cup of Tea, August 30

Labor Not in Vain, August 31

Posted by Joan Nienhuis at 5:55 AM

Thank you for your critique! I really appreciate reviews like this one.

I definitely agree with the hero thing! How am I supposed to root for a character that does little to impress or inspire me? Thank you for sharing your review!

Thank you for sharing your honest thoughts on this story and the book and author detals, I will take your critique into consideration before reading