The Scarlet Pen by Jennifer Uhlarik 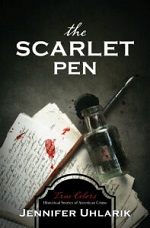 Book 12 in the True Color series – fiction based on true history.

Engaged to a monster.

Enjoy a tale of true but forgotten history of a 19th century serial killer whose silver-tongued ways almost trap a young woman into a nightmarish marriage.

In 1876, Emma Draycott is charmed into a quick engagement with childhood friend Stephen Dee Richards after reconnecting with him at a church event in Mount Pleasant, Ohio. But within the week, Stephen leaves to “make his fame and fortune.” The heartbroken Emma gives his a special pen to write to her, and he does with tales of grand adventures. Secret Service agent Clay Timmons arrives in Mount Pleasant to track purchases made with counterfeit currency. Every trail leads back to Stephen – and therefore, Emma. Can Timmons convince the naïve woman she is engaged to a charlatan who is being linked to a string of deaths in Nebraska?

I have appreciated this series and am sorry to see that this is apparently the last one. I liked learning about unusual crimes from the past.

This novel got off to a bit of a slow start as we do not know about the evil nature of Stephen until a ways into the story. I did not like Emma as a character but then, she was supposed to be naïve, refusing to believe for so long that her fiancé was not the man she thought. She was just stubborn, too, perhaps a bit one dimensional. Her character sure gives new meaning to the concept of blind love.

There is an interesting spiritual aspect to Stephen's character at the end. The concept of forgiveness and salvation in Christ is highlighted, ending a somewhat gruesome novel on a higher plane.

I like the author's notes at the end of the book detailing the facts upon which this fiction is based. I do wish the bare information would have been given at the beginning of the book instead of the end.

This is a good novel for readers who like fiction based on historical fact including chasing a serial killer.

Jennifer Uhlarik discovered westerns as a preteen. She devoured Louis L'Amour westerns and fell in love with the genre. She began writing her own stories of the Old West while in college at the University of Tampa. She has a BA in writing and has won five writing competitions and a finalist for two others. She has held jobs as a private business owner, a school teacher, a marketing director, and her favorite – a full time homemaker. She is a lifetime member of the Florida Writers Association and lives near Tampa, Florida, with her husband and teenage son.

Love the sound of this!