Medicinal Herbs by Adina Senft, author of Herb of Grace 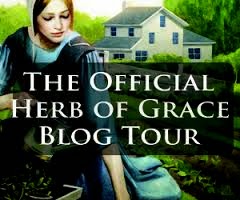 My backyard is full of medicine cleverly disguised as weeds. What have I been pulling up all these years? Needless to say, after writing these books, I’m a little more discriminating now.  While I’m outside with my flock of rescued chickens, just a quick look around shows me California poppy, feverfew, plantain, rosemary, chickweed, dandelion, and cleavers—all of which can be used in cures.

When the flat was full, she got a piece of paper and drew a grid, with the names of the plants in the squares, and a word or two about what kind of soil and sun each one liked.

“Ruth, I don’t even know where to start.”

One of the most humble weeds, the sticky one with the burrs called cleavers, is good for clearing the lymphatic system. Simply crush up several stems of the fresh plant, add in some orange calendula petals, and pour a quart of hot water over it to make a tea. Strain out the plant matter, cool, and drink it over the course of the day.

She found a moment to pull Amanda aside, and took a small package out of the pocket of her dress. “I made you some things for your skin,” she said. “Chickweed and cleaver tea—I wrote out a recipe that tastes gut—like breathing a meadow. It will clear your glands if you drink a cup every morning. And here is a jar of rose cream. Use it everywhere, not just your face.”

Amanda touched her jaw, where a couple of blemishes had appeared, her gaze falling self-consciously. “Is it that bad?”

Sarah gave her a squeeze. “Of course not. But there is nothing wrong with using the plants God gave us to make things better.”    —Keys of Heaven

My chiropractor, Harriet Segelcke, who is also deeply interested in homeopathic medicine, told me a simple cure for gout—a painful condition where uric acid forms crystals in the joints (often the toes). A glass or two of black cherry juice per day over a week will dissolve the crystals and relieve the pain. Of course, once it’s gone, it would be helpful to look into what’s going wrong in the diet to cause it in the first place.

Oran had stopped now, and was fiddling with the straps on the gray-sided buggy sitting next in line for repairs. “Medication ain’t so strange,” he muttered just loudly enough for her to hear. “It’s putting that burden on the church for no reason I can’t abide. Stuff’s expensive.”

I get my pedicures from a lady who’s a cross between a cosmetologist and an herbalist. Toenail fungus is a disgusting problem that lots of people have but don’t want to admit to … but she gave me a cure for it. Mix 4 parts grapeseed oil and 1 part oregano oil, and pour it into a bottle. Soak your toes in distilled white vinegar for 10 minutes every other day. After you dry your toes, use an eyedropper to put a drop or two of the oil mixture on each toenail, rubbing the excess dribble into your skin. Within a few weeks you should see the new toenail growing in fungus free.

“I have a customer who’s Englisch and as stubborn as an old mule. It’s taken me two months to convince him to eat his vegetables. Now he tells me he’s had toenail fungus for months and did I have something to cure it. Sure I do. He has to soak his toes in white vinegar for ten minutes every other day, and then put a drop of this oil on each toenail afterward. But if he follows my instructions even once, I’ll be surprised.” Sarah stuck a handwritten label on the bottle. “Why do people resist being made well?”

“Maybe they don’t really believe that something so simple will help them. We Englisch are used to just going to the doctor and taking a pill.”
—Keys of Heaven

One of the best cures for colds is the antiviral agent found in elderberries—and wouldn’t you know it, the tree fruits just in time for the onset of cold season. To make a delicious cough syrup, cook a couple of cups of ripe berries in water until the skins burst. Strain well, and return the liquid to the heat to simmer until it’s reduced by half. Add an equal amount of honey to sweeten. Administer by the teaspoonful up to four times a day, or add the teaspoonful to a glass of warm water for a soothing drink.

Legend has it that Roman soldiers used to take borage (Borago officinalis) before they went into battle, hence the expression “borage for courage.” It is known for its support of the adrenal glands, so maybe that’s why. This starry blue flower can be eaten right off the plant, and tastes like cucumber. Here’s a way to liven up the punch bowl at a summer party: Simply freeze a borage flower into the ice cubes in the tray and when you add the cubes to your punch, it will look as though flowers are floating in it. Maybe you’ll find the wallflowers among your guests plucking up their courage to be more social!

“If a woman is unhappy but can’t tell the cause, I often give her my Sunshine Tea. You probably have everything you need to make it in your own garden, except borage flowers and rose petals, which I enclose in the zippy bag.”
—Herb of Grace

In Shakespeare’s Hamlet, Ophelia says, “There’s rosemary, that’s for remembrance: pray, love, remember.” Studies have shown that breathing in the scent of rosemary helps to aid memory. Of course, it’s also a cooking herb, great for flavoring meat and vegetables. But some health professionals are looking into its use to help with cognitive function, memory loss, and even treatment of Alzheimers.

“Ruth made it sound so ordinary—as though selling herbs with which people could cure themselves was no different than selling them rosemary and thyme to cook with. But both went into the body and helped it to work as God meant it to. It was clear she hadn’t been thinking of it in the right way before at all.”  —Herb of Grace
Posted by Joan Nienhuis at 7:50 AM