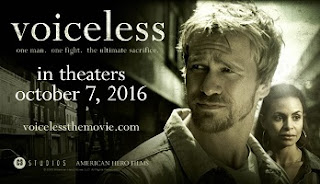 Voiceless is a movie that will be released in theaters October 7. I was given the opportunity to screen the movie and post a review.

The message of this movie is an important one for the church and individual Christians. While the specific topic of this movie is abortion, the principle is much broader. Who will be a voice for the voiceless? Who will speak for the refugee, for the persecuted? 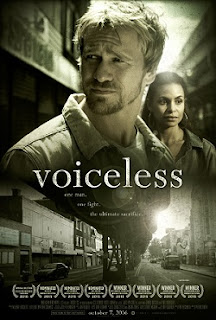 One area of responsibility is the church. What is the responsibility of the church when an opportunity to speak arises? The church and pastor in this movie want to play it safe and not get involved. Jesse is a recently discharged vet who is vexed by the presence of an abortion clinic across the street from his place of ministry. He charges ahead, taking action. What can be the effectiveness of just one individual? (The movie has a positive outcome here.)
While I really appreciate the message of the movie, I was a little disappointed in the cinematography and acting. Many of the scenes were dark and I had difficulty clearly seeing the action. There were many pensive scenes, moments when people were just looking at each other, and I thought the movie bogged down from time to time. The acting was decent but I would not say it was excellent. It pained me to see Rusty Joiner attempt to walk with a bum knee. I also don't understand why Jesse has a real anger issue. I felt that just sidetracked the message of the movie. By far the best performance was by Susan Moses, playing the part of a Scottish born zealot. She had an emotional part while the other characters seemed stilted.

I suggest you see this movie when it releases in October because the message is an important one. I suggest you go with a group and then discuss it afterwards. There is a church kit available at http://voicelessthemovie.com/.

You can read a synopsis of the movie and watch the trailer at http://voicelessthemovie.com/.

I received the opportunity for an advanced screening of this movie through Icon Media for the purpose of an independent and honest review.
Posted by Joan Nienhuis at 6:40 AM