Behind the Scenes by Jen Turano 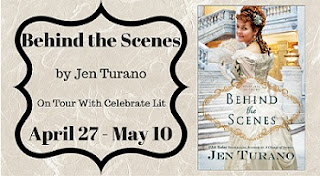 Book: Behind the Scenes

Miss Permilia Griswold may have been given the opportunity of a debut into New York high society, but no one warned her she wasn’t guaranteed to “take.” After spending the last six years banished to the wallflower section of the ballroom, she’s finally putting her status on the fringes of society to good use by penning anonymous society gossip columns under the pseudonym “Miss Quill.”

Mr. Asher Rutherford has managed to maintain his status as a reputable gentleman of society despite opening his own department store. While pretending it’s simply a lark to fill his time, he has quite legitimate reasons for needing to make his store the most successful in the country. When Permilia overhears a threat against the estimable Mr. Rutherford, she’s determined to find and warn the man. Disgruntled at a first meeting that goes quite poorly and results in Asher not believing her, she decides to take matters into her own hands, never realizing she’ll end up at risk as well.

As Asher and Permilia are forced to work together and spend time away from the spotlight of society, perhaps there’s more going on behind the scenes than they ever could have anticipated. . . .

I love Turano's novels. They are funny, have quirky characters, a bit of romance, and are even thought provoking.

This novel starts off with a Vanderbilt ball where one of the ladies has a dress with chicken feathers glued to it. Later on that same woman, thanks to her employer, has an orange face. It may sound crazy but makes sense because of her eccentric employer.

The most enjoyable aspect of the humorous side of this novel is the snappy dialog. Permilia has quite the ability to communicate exactly what she is thinking. Raised as somewhat of a tomboy by her mine owning father, she is now trying to be molded into high society by her persnickety stepmother. That is a recipe for disaster and Permilia feels free to express her thoughts about it.

The other characters are great too. Poor Asher. He's a gentleman who doesn't quite know what hit him when Permilia crashes into his controlled and predictable life. She is a very capable woman, something a society woman of her day was not supposed to be. Their “romance” is something else.

The novel is informative too. This was a time when women were beginning to think toward gaining the right to vote and the right to work where they wanted. Permilia is a very forward thinking woman and some of the reactions to her opinions are priceless.

Parts of this novel could have been trimmed a bit. It may not be Turano's best. Nonetheless, it is a good historical novel with humor, quirky characters, a different kind of romance, and an informative setting.

Jen Turano, author of nine books and two novellas, is a graduate of the University of Akron with a degree in clothing and textiles. She is a member of ACFW and lives in a suburb of Denver, Colorado. Visit her website at www.jenturano.com.

Amusing things happen to me all the time, but I think my favorite was back in college when I was a lifeguard. You see, there’s a lifeguard code – You will be cool at all times, especially when you’re sitting in a lifeguard chair, twirling your whistle exactly so, and, you know…looking cool. So, there I was, in my black lifeguard bathing suit – swinging my whistle. It was an unusually hot day, so I’d angled my umbrella exactly right as I watched the diving-board section. Now, I know this might come as a surprise, but being a lifeguard at the neighborhood pool isn’t exactly thrilling. It’s rare that anything exciting happens, and that particular day was no exception…until a large gust of wind came out of nowhere and the umbrella took it upon itself to close – right over me. And because it was now really gusty, the umbrella then lifted up, taking me with it right off the chair and into the depths of the deep end of the pool. From all accounts, it was quite the sight. First, there I was, swinging my whistle and looking groovy. Then all you could see were my legs flailing about as the umbrella covered the rest of me, and then…I was plummeting toward the pool, hit the water with the umbrella over me, and promptly sank. Obviously I managed to get out of the umbrella, but in the process, part of my bathing suit came off, and…well, that’s a story for another day.
“Andrew Henry’s Meadow.” It was actually my little brother’s book, gotten from one of those book of the month clubs, but I loved it. I recently found a copy on an e-site and ordered it, and it’s just as delightful today as it was back in my childhood.
I don’t actually cook much even when I’m not on deadline, so that’s not really an issue. Al and I do a lot of salads or throw some chicken on the grill. We also have a lot of grocery stores that have wonderful deli and gourmet foods, so we get a lot of things there. As for cleaning, I’m one of those neurotic people who can’t work without everything being in place, so I do a lot of tidying up before I go to bed. And, because I do some of my best thinking when I clean, I’ve been known to abandon my writing when I get stuck and pick up a mop or cleaning rag, which means my house is rarely a disaster since I need to get unstuck a lot.
I do the majority of my writing in my office, although I will occasionally take a pad of paper and a pen outside to handwrite when I get bored of my office or it’s a really nice day and I don’t feel like being trapped inside. It’s not that my office is my favorite place to write, it’s more that my writing is my job and I’m more focused on that writing when I approach it as such.
I really like when characters and new story ideas begin to fester. That normally happens when I’m in the midst of another series. By the time I’m done with whatever series I’m working on, the next series is pretty firmly set in my mind, which means I can jump right in as I wait for edits on recently completed work. My absolute favorite part of writing, though, is when I turn in the very final edit on a book and don’t see it again until it comes out in print. Although, I must admit, I’ve never, not once, read one of my books after it has gone to print. Seems rather pointless since I do always know how the book is going to end.
I’ve been wanting to set a book during Alva Vanderbilt’s famous costume ball of March, 1883, for years. Since I decided to slowly travel through the Gilded Age, I just reached 1883 on my plot timeline, so knew I was finally going to get to throw some characters into the very midst of Alva’s ball. It was a blast to write, loved going back to all my books on this particular ball and seeing the pictures, and only wish the Vanderbilt house at 660 Fifth Avenue was still standing so I could visit it in person to visualize the splendors located inside a little more clearly.
I think like most writers, I simply get inspired by the world around me. I love to people watch, and I love to imagine all sorts of outlandish scenarios as I do that watching. I also get inspired by reading the headlines of the daily papers, and by the research books I read. I also love to look through old photographs of the Gilded Age, and became intrigued with Alva Vanderbilt’s ball when I saw a picture of a young lady, Miss Kate Strong, with a stuffed cat on her head and wearing a choker necklace with the name Puss engraved on it. That was all it took for me to investigate the Vanderbilt ball further, delighted to discover it truly was a ball that only comes along every blue moon.

April 27: Reading Is My SuperPower
April 27: The Scribbler
April 27: Genesis 5020
April 27: These Splendid Sentences
April 28: Back Porch Reads
April 28: Smiling Book Reviews
April 28: Fiction, Faith, and Fun
April 28: Just the Write Escape
April 29: Bookworm Mama
April 29: Book Reviews From an Avid Reader
April 29: Books. Books. AND More Books.
April 29: Karen Sue Hadley
April 30: Lighthouse Academy
April 30: Radiant Light
April 30: Bigreadersite
April 30: Lane Hill House
May 1: Faithfully Bookish
May 1: Counting Pinecones
May 1: Blogging With Carol
May 1: Moments Dipped in Ink
May 2: inklings and notions
May 2: Blossoms and Blessings
May 2: Book Bites, Bee Stings, and Butterfly Kisses
May 2: Neverending Stories
May 3: For The Love of Books
May 3: Singing Librarian Books
May 3: Book by Book
May 3: Pause for Tales
May 4: A Baker’s Perspective
May 4: Chas Ray’s Book Nerd Corner
May 4: cherylbbookblog
May 4: Rachel Scott McDaniel
May 5: With a Joyful Noise
May 5: Baker Kella
May 5: A Reader’s Brain
May 5: Southern Gal Loves to Read
May 6: A Greater Yes
May 6: Christian Bookaholic
May 6: Connie’s History Classroom
May 6: Splashes of Joy
May 6: Just Commonly
May 7: A Simple Life, really?!
May 7: D’S QUILTS & BOOKS
May 7: Daysong Reflections
May 7: The Power of Words
May 8: Ashley’s Bookshelf
May 8: Eat, Read,Teach, Blog
May 8: Giveaway Lady
May 8: Debbie’s Dusty Deliberations
May 9: Bibliophile Reviews
May 9: History, Mystery & Faith
May 9: I Hope You Dance
May 9: Simpleharvestreads
May 10: His Grace is Sufficient
May 10: History, Hope, Laughter & Happily-ever-after
May 10: Raining Butterfly Kisses
May 10: Reader’s Cozy Corner

I received a complimentary egalley of this book through Celebrate Lit. My comments are an independent and honest review.
Posted by Joan Nienhuis at 6:13 AM