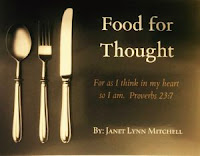 Food for Thought is filled with personalized verses just for you. It’s been written to help you claim God’s Word as your own. The thoughts included within the verses are from fellow dieters. Food for Thought is not meant to be a substitute for actual Scripture, but an addition, bringing you new insight, perspective, hope and encouragement as you move toward and reach your weight-loss goal. Blank pages have been placed in the back so that you can add additional Scripture and/or words of encouragement. Recite these verses and include them when you pray. Then watch as God’s Word rejuvenates and empowers you. Experience your faith increasing, as faith comes by hearing, reading, speaking, and living the Word of God.

You can buy this flip book here.

Mitchell has made a collection of verses on a variety of topics from a number of Bible translations. She has added phrases to have each verse apply to weight loss or eating in general. For example, under the topic of Binging/Bulimia, Mitchell has Proverbs 25:16b in the Amplified. The actual Amplified reads, “Eat only as much as you need, Otherwise, being filled excessively, you vomit it.” The way Mitchell has rephrased it, “I only eat as much as is sufficient for me (adequate to meet my physical needs), as being filled (gorged or stuffed) with it, I vomit.” She has added explanatory words in parenthesis and has slightly rewritten the verse so that it can be used as a positive confession. Here is another example: “The food I get by cheating may taste delicious (incredible and scrumptious), but it turns to gravel (unhealthy and harmful calories – a heavy load).” Proverbs 20:17 CEV

I recommend this flip book to those who are looking for Bible verses to confess on topics related to eating and loosing weight. Mitchell has done a good job of rephrasing Bible verses to be used specifically by those desiring to be disciplined in their eating. There are also sections on faith, giving thanks, goals etc., but the majority of the verses deal with issues concerning food.

I reviewed this flip book in digital form so cannot speak to its physical nature.


Candid, dynamic, friendly…and memorable are some of the words used to describe Janet Mitchell. 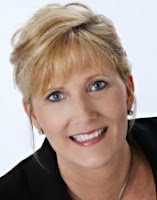 Her fun, engaging style keeps her audiences wanting more. As a master storyteller, she shares her heart, passions and faith, relating incidents from her life that will touch you and make you laugh. Janet addresses relevant life issues and how it just takes one to make a difference in your world!

Janet has held staff positions with Youth for Christ and Forest Home Christian Conference Center and has served as the director of a Christian preschool. Janet is a CLASS Speaker (Christian Leaders, Authors, and Speakers) and is a popular speaker for women’s events, MOPS, family camps and single-parent groups.
As a senior in high school, Janet lost the use of her legs following surgery. On the night of her tenth surgery, she met Marty, who became her cheerleader and was alongside her as she learned to walk again. Eventually, he became her husband. Janet and Marty have been married for over thirty-five years and have three children. Janet’s knee problems reoccurred when she was thirty-two. She was horrified to learn she had been a victim of medical negligence, fraud and concealment. Her additional surgeries had been attempts to correct the mistakes. Janet has since become a voice for others who have suffered medical fraud. Assembly Bill 2571, borne out of her misfortunes, unanimously passed both the California Assembly and the Senate and was signed into state law on August 31, 2000. Her story, Taking a Stand, has motivated others to “take a stand” and remain firm in their faith through the good, bad, and the outrageous.
Janet has been featured on radio programs across the nation, including popular programs such as Focus on the Family and Billy Graham’s Decision Today. Janet has appeared on television programs such as, Fox, CBS and ABC News, Aspiring Women, The Harvest Show, and Chuck and Jenny. Her stories and articles have appeared in the Chicken Soup for the Soul series, Multnomah’s Stories for the Extreme Teen, and in magazines such as Woman’s World, Light and Life, and Celebrate Life. Her Testimony, “When Doctors Make Mistakes,” was published in the July/August 2005 issue of Today’s Christian Woman magazine.
Janet’s book, A Special Kind of Love, published by Broadman and Holman and Focus on the Family, has been highlighted by Rick Warren in his “Ministry Toolbox.” Her Hands on Faith: Family Nights and Hands on Faith: Family Fun books by Carson- Dellosa are now available along with Janet’s five new Praying Scripture Flip Books. Janet’s Taking a Stand was released in November of 2006. It is truly a testimony of God’s faithfulness through the good, bad and outrageous. This past year Janet’s latest book, Words Matter became available. One thing Janet has learned is:
It just takes one to change the world we live in.

Posted by Joan Nienhuis at 6:44 AM