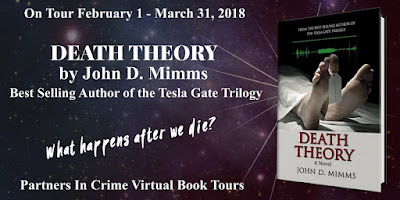 Mankind’s greatest fear is also its greatest obsession. What awaits when we shuffle off the mortal coil of this world? We all have our beliefs based on faith or science, but both struggle to provide a tangible answer. Perhaps it is possible to prove the existence of the soul, to prove it goes on after death. Following the violent death of his parents, Jeff Granger seeks reassurance that they have moved on. After recording what he believes to be his mother’s voice at the site of the accident, Jeff’s obsession throws him into paranormal research. Realizing that most people are doing it just for fun, Jeff forms his own group. He is joined by Debbie Gillerson, a school teacher; Aaron Presley, a mortician; and Michael Pacheco, a grocery store manager. Even though they are all investigating the paranormal for very different reasons, they are all trying to fill an emptiness in their lives. The deeper they probe paranormal theory, the darker their results. The only way to truly test the ‘Death Theory’, as theorized by Aaron, is to monitor a person’s energy at the moment of death. Horrified by the immoral and unethical application, the group dismisses the theory. A darkness seems to follow their investigations and the police become involved. A former colleague of Jeff’s, a self-proclaimed demonologist, believes a demonic force is attached to the group. The police are not so sure. Evil comes in many forms as the small group is about to discover.


I usually do not read fiction dealing with the paranormal. I felt a little uncomfortable (scared) while reading the first part of the book yet by the time I finished the novel I was pleasantly surprised. Mimms goes into detail about how paranormal investigations are carried out and the equipment used. I found out that the cause for some supposed paranormal experiences can be something very practical, like faulty electrical wiring. The plot is methodical but I was really taken off guard with the serious twists at the end of the book. Mimms uses some of his characters to express strong opinions, such as about mental illnesses. His writing style is basic and unsophisticated. In the end, this is a book that has a good plot and a great deal of detail about paranormal investigations.

Death is the closest thing to omnipotence we will experience in our brief time on this planet. It is an all-encompassing power, binding everything, and providing a cold certainty to an otherwise uncertain existence. The firm grip of this assurance reaches much further than the extinguishment of life; it greedily claims the hope and happiness of those who remain. It is a definite ending, but is it also a provable beginning?

Linda Granger did not see death coming.
Sleep shielded her from the unfolding horror. The looming headlights and the panicked screams of her husband were beyond her conscious state. When her head shattered the windshield, the dream about her son ended, sending her into what’s next. Linda was gone before the car rolled seven times and wrapped around a large oak tree. Her husband, Stephen, was not as fortunate. He died two minutes later. Linda had fallen asleep from emotional exhaustion. She died with regrets.

John D. Mimms is a business owner, paranormal researcher and author. John served as the Technical Director for a TAPS (The Atlantic Paranormal Society) family paranormal research group in Central Arkansas. During his four-year tenure with the organization, he helped supervise over 100 investigations and wrote more than sixteen technical articles. Paul Bradford, of Ghost Hunters International fame, read one of John's articles titled A Christmas Carol Debunked live on the air of the Parazona Radio program on Christmas Day 2009. John also wrote a definitive technical/training manual, which is a comprehensive guide on equipment usage, investigation protocol and scientific theory for paranormal research.
In 2009 John decided to couple his knowledge of paranormal phenomena with his lifelong love of literary fiction. John's first published work, The Tesla Gate, is the first installment of a three-part, heart-wrenching, sci-fi/paranormal drama.
Book 1 of this unique, ground-breaking story released July 2014 through Open Road Media. In January 2016, Open Road Media released The Tesla Gate Book 2: The Myriad Resistance. Book 3: The Eye of Madness is slated for release September 27, 2016. Though fictional, the trilogy is based on scientific, paranormal theory.
Publishers Weekly declared about The Tesla Gate in the March 3, 2014 issue "…touching sci-fi story that takes the reader on an unlikely road-trip adventure…a fast read with some entertaining ideas and a real emotional core in the relationship between father and son."
The Examiner proclaimed in June 2014: "Entertaining as well as poignant, this book is extremely imaginative in its basic premise as well as the many colorful and emotionally compelling events that take place."
John resides and writes on a mountaintop in central Arkansas with his wife and two sons.

Visit these other great hosts on this tour for more great reviews, interviews, guest posts, and giveaways!
Click here to view the Death Theory by John D. Mimms Participants


I received a complimentary digital copy of this book through Partners in Crime Virtual Book Tours. My comments are an independent and honest review.
Posted by Joan Nienhuis at 6:45 AM