A Light So Lovely by Sarah Arthur

I knew of A Wrinkle in Time and Madeleine L'Engle but had no idea of the spiritual legacy her life and literary works produced. Arthur sees L'Engle as a gift to mainline Christian evangelicalism at a time when the scope of Christianity was narrowing. L'Engle's works burst onto the scene when the attitude among evangelicals was believing in faith or science. L'Engle encouraged a wonder of God in art, literature, and science. Her work was like a window to all that points to Christ, Arthur says. (17)

Arthur interviewed artists and friends whose lives were greatly influenced by L'Engle. I had no idea that L'Engle helped so many artists and writers see their work as a religious vocation. (22) She argued that you could be an artist and a Christian. That viewpoint was controversial at the time. Arthur covers the controversy well.

Arthur surveys L'Engle's life and works. I was surprised at L'Engle's interest in Einstein and physics. No wonder she wove science into her writing. I especially appreciate L'Engle's friendship with Luci Shaw. I liked how they could “lovingly” argue within their secure friendship. 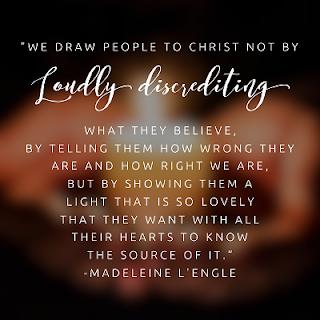 I was intrigued by the claims of L'Engle critics. She was charged with universalism and promoting New Age ideas. Arthur does a great job exploring what makes a “Christian” book as well as the supposed divide between the sacred and the secular. I really like how L'Engle gave Christians freedom to use their God given imagination. We have come a long way since then.

So why read a book about L'Engle now? It seems we are again in a time of division among evangelicals. Arthur points out that L'Engle offered a message of hope in a time of “wavering evangelicals and post-fundalits...” (64) Like a generation ago, we can learn today from L'Engle's legacy. May we again present a light so lovely that others will be attracted to Christ and His people.

You can find out more about the book, watch a video, listen to an excerpt from the audiobook, and read a chapter here.

Sarah Arthur is the author of a dozen books ranging from popular devotionals to serious engagement with literature. She serves as preliminary fiction judge for the Christianity Today Book Awards and has been writer in residence for the Frederick Buechner Writers Workshop at Princeton Theological Seminary. A graduate of Wheaton College and Duke University Divinity School, she has served in full time and volunteer youth ministry for over twenty years. She and her husband and their two boys live in Lansing, Michigan, where her husband is a pastor. You can find out more at http://www.saraharthur.info/.

I received a complimentary copy of this book through Handlebar. My comments are an independent and honest review.
Posted by Joan Nienhuis at 12:03 PM