The Doomsday Medallion by Avanti Centrae Aikido black belt Maddy Marshall is celebrating the completion of her black ops training when news of a military takeover in the South China Sea shocks the world because it was predicted by a sixteen-year-old French student. When intel chatter spells danger to Avril, the young seer, VanOps Director Bowman assigns Marshall and her twin brother, Will Argones, to protect the girl.

Emotions between the siblings are running hot due to their aunt’s recent stroke, which has reminded them of the childhood accident that scarred both his chin and her heart. Tensions ratchet higher when they arrive at Avril’s home to find the instant social media star has been kidnapped, leaving them with only clenched fists and cryptic clues that lead to a formula encoded on an etched-bronze medallion.

While Taiwan fears an invasion that will set off an apocalyptic chain of events, Marshall and Argones race through medieval French towns, Italian cathedrals, and ancient Greek temples attempting to find Avril before their enemies use the girl to discover the Holy Grail of military intelligence. If the team fails, they won’t need a crystal ball to know millions of innocent souls will be destined to join Nostradamus in the afterlife.

The Doomsday Medallion is an electrifying, globe-trotting thriller that delves into humankind’s timeless fascination with prophecy and illuminates the mesmerizing and dangerous potential of a weaponized oracle.
You can watch the book trailer here.

Centrae has given readers another action packed novel. I like how she combines history, science, and legend into an engaging story. The VanOps characters are a mixed bag. Some have special abilities, like Maddy throwing fire balls. While the ability might seem like science fiction, Centrae gives a reasonable scientific explanation. Other characters appear to be quite normal, even with an irritating habit of making jokes in the midst of a serious time.

I like the central aspect of the plot of powerful people wanting the ability to predict the future. We learn quite a bit about Nostradamus when one of his descendants, a teen, hits the mark in one of her many predictions. The ultimate lesson learned from the chase for Nostradamus' secret is surprising and enlightening.

There is lots of travel by the Van Ops team, from one end of Europe to the other. Part of my enjoyment of novels by Centrae is all the locations involved. The action in the novel is periodic with sections of travel and historical investigation in between. I really appreciate Centrae's historical note at the end, indicating fact and fiction. 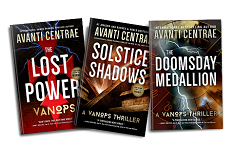 This is another engaging and informative novel in the series. I have read and reviewed the earlier novels in the series and you can read my reviews of The Lost Power and Solstice Shadows.

Avanti Centrae always wanted to be a writer. Her father served as a U.S. marine corporal in Okinawa, gathering military intelligence during the first decade after the Korean War and her mom was a teacher. She grew up haunting silver bookmobiles in the Midwest but her practical family urged her to get a degree in computer technology, which she did. Eventually, she became a Silicon Valley IT executive, but her heart wasn’t in it. Before her hair began to turn gray, she had a health scare, which forced her to face her own mortality. At the top of the bucket list was becoming a bestselling author. She decided to break free of the golden handcuffs to pursue her dream. After years of drafting, editing, and finding an agent and publisher, her debut, VanOps: The Lost Power, released as an instant Barnes and Noble Nook bestseller. It went on to win three literary awards. Solstice Shadows, VanOps #2 quickly became a #1 Amazon bestseller in the U.S. and Canada, before winning a bronze medal at the Readers' Favorite book awards and nabbing the Chanticleer Global Thrillers Genre Grand Prize. The Doomsday Medallion won an Honorable Mention at the Southern California Book Awards. She’s honored that her work has been compared to that of James Rollins, Steve Berry, Dan Brown, and Clive Cussler. When not travelling the world or hiking in the Sierra mountains, she’s writing her next breathtaking thriller in Northern California, helped by her family and distracted by her German shepherds. You can find out more at https://www.avanticentrae.com/.
Thunder Creek Press, 379 pages.
I received a complimentary egalley of this book from the publisher. My comments are an independent and honest review.

Posted by Joan Nienhuis at 7:11 PM

Thanks for taking the time to read THE DOOMSDAY MEDALLION and write a thoughtful review! I'm glad you enjoyed the adventure!