The Catch by Lisa Harris 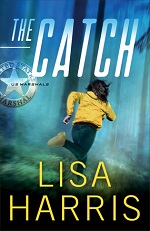 Everything hidden is eventually foundAfter a harrowing attempt on a judge's life at the courthouse, Deputy US Marshals Madison James and Jonas Quinn are tasked with finding a missing woman and an endangered child in connection to the murder of the judge's wife. What seems like a fairly straightforward case becomes hopelessly tangled when the marshals discover that the woman they are searching for is not who they think she is.Madison and Jonas are forced into a race to find the woman and the child before the people who want her dead discover her location. And in a final showdown that could cost her everything, Madison will come face-to-face with the person who murdered her husband.

Harris has written another pretty good suspense filled novel with a dose of romance included. I really like the setting of the Seattle area. A lifelong western Washington resident, I like her references to our beautiful scenery like Mt. Rainier, the Olympic Mountains and Snoqualmie Falls. Her description of the Hoh Rain Forest was great. Harris did mess up with the Schmitz Preserve Park, however, as it is in west Seattle and far from a freeway. (883/4569)

The main characters, Madison and Jonas, are U. S. Marshals. I was a bit puzzled by some of their actions. The attempt at arresting Callum was funny. No one was covering his get away vehicle and the marshals identified themselves too soon, allowing him to run and escape. (2508/4569) I laughed but I don't think the scene was supposed to be humorous. The same kind of botched arrest attempt happened in the Schmitz Preserve. I was surprised the marshals in the Seattle office would not be aware of a person in WITSEC being in their local, except for the person's handler. I really do hope the U. S. Marshals are better at their job than portrayed in this novel.

Harris explores some themes in this novel, such as working through grief, looking to God for strength. The budding romance between Madison and Jonas is handled well and I did like how their characters are developed. Despite what seems like an almost unbelievable twist near the end, I did enjoy reading this novel and will continue to look for more from Harris.

This novel is the third in the U.S. Marshals series by Harris and you can read my reviews of the previous books: The Escape and The Chase.

Lisa Harris is a USA Today bestselling author, a Christy Award winner, and the winner of the Best Inspirational Suspense Novel from Romantic Times for her novels Blood Covenant and Vendetta. The author of more than forty books, including The Escape, The Chase, The Traitor's Pawn, Vanishing Point, A Secret to Die For, and Deadly Intentions, as well as The Nikki Boyd Files and the Southern Crimes series, Harris and her family have spent over 17 years living as missionaries in southern Africa. She is currently stateside in Tulsa, Oklahoma. Learn more at www.lisaharriswrites.com.

Posted by Joan Nienhuis at 5:27 AM

This is one I a looking forward to reading as well.