A Cloud of Fraud by Linda Ferreri Blog Tour and Giveaway 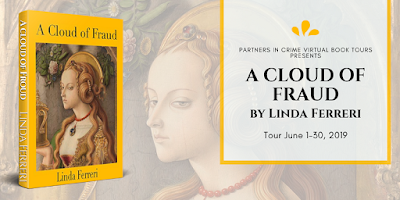 A Cloud of Fraud 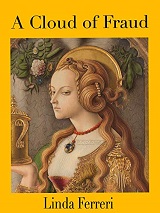 A man is shot dead in front of City Hall in Philadelphia where his family is tangled in a bitter lawsuit. One brave woman, drawn there by a work of art, finds herself following a twisted trail to the hills of Le Marche in Italy to learn why. All the while, the cloud of fraud grows thicker and darker around her. But, as C. S. Forester said, perhaps the scandal of fraud enhances the flavor.

This thrilling story grabs and holds the reader from the first chapter through unexpected twists all the way to the richly satisfying ending. Art expert Claire Bliss and police Comandante Baldo are joined and antagonized by unforgettable characters in both Philadelphia and Italy. The authenticity of Ferreri's players and their territories give special vibrance to the novel.

Lovers of the Renaissance will be drawn in immediately by the book's cover, a painting of Mary Magdalene by Carlo Crivelli (ca. 1480) in the Rijksmuseum. Inside the book, a great art crime story unfolds together with a gem of a murder mystery.

A Cloud of Fraud is colorful, fast-moving entertainment.

Ferreri is a law expert in art and I liked learning much about a few Italian Renaissance artists and their work. I appreciated interesting information about Mary Magdalene, the subject of several of Crivelli's paintings. There was much in the complex plot about forgeries of paintings and the stealing of original and famous works of art too.

Her writing style was a little difficult for me. The dialogue was frequently stilted and sometimes repetitive. Here's an example:
“Oh dear me!” Robson said. “You mean a forgery?”
“Yes, I mean a forgery. ...” (187)
Also, the setting frequently changed between Philadelphia and Italy at the start of a chapter without any notification, such as a heading. I found that disconcerting. There are little spurts of suspense and basically no romance in the novel.

This is an informative novel and a good one for readers who would like to learn about the world of art and international thievery.

Early on in the Hard-heads case, at one of the bar association luncheons, Judge Pirandello had positioned himself next to one of his former clerks who was now a successful litigator in the Probate Court. Biggers, by name. There was the introductory chat about the wellbeing of their family members and the joke about the latest case here or there. The dialogue was familiar to both of them. The Hard-heads plaintiff was a problem person, the judge had learned, and he needed to be squashed to put an end to mostly frivolous claims, driven by greed. Everybody in the family knew it, the judge heard. He knew the type. The Probate Court was littered with greedy relatives, angry children with buxom young stepmothers wearing expensive jewelry their fathers had bought. He knew it all. The judge wanted rid of this case, and so he was pleased to learn that it was not worthy of His Honor's dignified much less close attention. The Hard-heads case had to go.
It would have gone long before now, the judge was thinking to himself as he growled into the cup of black tea, but these damned people had refused to take the hint, refused to be cowed or put in their places. Here and there at the few hearings he had conducted over this motion or that, he had seen a shrug of the shoulders by one or another lawyer.
"What could we do?" They might as well have said that out loud. The judge understood.
His knee was throbbing, but Judge Pirandello refused to have it replaced. The fact that cold weather was coming on made it worse. The goddamned orthopedic surgeon was another money-grubber. Were there no professionals left in his world who were not money-grubbers? He stretched his corpulence forward over the edge of his chair to reach for his footstool, then winced as he elevated the bad leg. He yelled out for Mary to bring him another cup of tea. Then, he opened the enormous file on the small table beside his chair.
In Re the Estate of Seri. He hated even the name. Italian people should not behave in this fashion, he thought. His own father would have come back from the dead to beat the daylights out of his heirs if they had behaved as these people were behaving. Suing one another. Claiming fraud. All of it. Disgraceful, he thought. They were each poised to receive a generous amount of money but no, that wasn't good enough. As with errant children, the Judge was both angry with and ashamed of the parties.
***
Excerpt from A Cloud of Fraud by Linda Ferreri. Copyright 2019 by Linda Ferreri. Reproduced with permission from Linda Ferreri. All rights reserved.

Linda Ferreri is the author of several art crime novels as well as witty illustrated iBooks. She is a highly respected international art law expert who divides her time between the United States and Le Marche in Italy.
Sometimes she says her most amusing book was her first, The King of UNINI, a sophisticated little romance set in Paris.

Visit these other great hosts on this tour for more great reviews, interviews, guest posts, and giveaways!
Click here to view the A Cloud Of Fraud by Linda Ferreri Participants.

This is a rafflecopter giveaway hosted by Partners in Crime Virtual Book Tours for Linda Ferreri. There will be 1 winner of one (1) Amazon.com Gift Card. The giveaway begins on June 1, 2019 and runs through July 2, 2019. Void where prohibited.

I think I would enjoy this title especially since I visited Italy years ago.