The Language of Heaven by Sam Storms 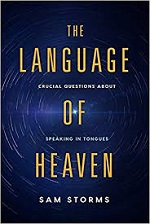 Speaking in tongues is a controversial issue within Christianity. There are those who believe God still gives the gift to believers while others are convinced He does not. Storms does a great job in exploring what both continuists and cessationists teach. He shares his own story and explores what is found on the topic in the New Testament.

He covers many issues, such as whether the baptism of the Holy Spirit is a second act or occurs at conversion. (Storms believes the latter.) He investigates whether tongues are human languages. (He shows they are not and biblically do not have to be.) Those are just a few of the topics covered in the book.

My favorite part of the book was Storms' comments on some seeing tongues as anti-intellectual. He notes there is an “approach to Christian spirituality that argues nothing is of value unless it can be cognitively understood.” (90) They oppose the idea that the Holy Spirit might engage the human spirit directly. (90) Storms writes of speaking in tongues as transrational, an experience that exceeds the limits of our finite minds. (92-93) The experience transcends our limited human intellectual capacity. Storms firmly shows that Paul believed “there was personal spiritual value in a practice that did not pass through the cognitive mechanism of his thinking brain.” (94) What good news, that I am not limited by my own mental abilities when it comes to communicating with God.

Storms does not have all the answers to how the Spirit works nor can he quantify the Spirit's work in a tidy bundle. He writes, “This is a high hill to climb for those of us who were raised in intensely cerebral or deeply intellectual churches where theological precision and doctrinal authenticity were prized above all else.” (176) Having been raised in such a church, I greatly appreciate Storms' book.

I highly recommend this book to any believer who wants to understand more about speaking in tongues. Storms is a favorite author of mine and this may be his best book yet.

Sam Storms describes himself as an Amillennial, Calvinist, charismatic, credo-baptistic, complementarian Christian. He has degrees from the University of Oklahoma (BA), Dallas Theological Seminary ThM) and the University of Texas (PhD). He served in the pastorate until 2000 when he became associate professor of theology at Wheaton College. He resigned four years later to establish Enjoying God Ministries. In 2008 he became Lead Pastor for Preaching and Vision at Bridgeway Church in Oklahoma City, Oklahoma. He is on the Board of Directors of Desiring God and serves as a member of the Council of The Gospel Coalition. You can find out more at https://www.samstorms.com/ .

Posted by Joan Nienhuis at 6:03 PM