The Pink Bonnet by Liz Tolsma 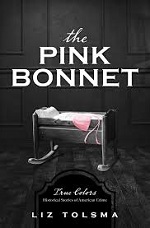 This is the second in the True Colors series, novels of historical American crime. This one deals with a woman who ran an adoption agency in Tennessee from 1924 to 1950. It is estimated she kidnapped five thousand children and sold them to the highest bidder. Tolsma did a good job of imagining Cecile, whose child was taken deceptively in 1933 and then adopted out. We see the length a mother would go to find her daughter.

There is lots of suspense in this novel as Cecile teams up with a fellow. I felt the action was a bit repetitive. The same kinds of near successes happened again and again. I almost felt the plot was better suited for a novella length. Tolsma portrayed well the situation in the south during the Great Depression. The power wielded by a few in the city was also well presented. The contrast between a loving mother and a heartless adoption agency owner may have been a little overdone.

I am enjoying this series on historical crimes in America as it has introduced me to different historical settings and events about which I knew nothing. I will be looking forward to the next in the series.

Liz Tolsma has written several WW II novels, several prairie romance novellas, and an Amish novel. The Pink Bonnet is her first romantic suspense. She is a popular speaker and works as a freelance editor. She and her husband have three internally adopted children and live in Wisconsin.

I received a complimentary egalley of this book from the publisher. My comments are an independent and honest review.
Posted by Joan Nienhuis at 5:57 AM