My Dearest Dietrich by Amanda Barratt 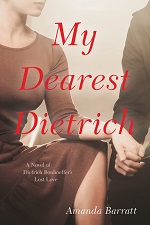 I have mixed feelings about this book. It is very well written and very well researched. The characters were developed well. Barratt really gave a sense of the dilemma Christians felt when the leader of their country went horribly wrong. Some felt it was their duty to serve their country, such as in the military. Others felt they needed to stop Hitler, as did Bonhoefffer. I also got a very good sense of the pain and agony Christians experienced at the loss of their loved ones.

Part of the character development included dialogue and actions. Barratt notes at the end of the book that almost all of the events she portrayed actually happened. She said she did create a German military officer who tried to force Maria into a relationship.

And that bothers me a bit. Authors of historical fiction must imagine the thoughts, words and actions of real people, such as Barratt did with Bonhoeffer. As I read the book, I kept wondering if Bonhoeffer would really think that or say that or do that. It was a distraction for me.

Something else I found distracting was the odd use of a few German words in dialogue when nearly all of it was in English. I know they spoke German and the book is in English. When I read something like, “...vater and brother,” I wonder why Barratt would use the one German word yet not the one for brother. (2430/6248)

I do recommend this book as it portrays the dilemma Christians experience when the leader of the country goes wrong. One could have some good discussions around that issue. Just remember this is a novel.

Amanda Barratt is the ECPA best-selling author of several novels and novellas. She is a member of American Christian Fiction Writers and a two-time FHL Reader's Choice Award finalist. She and her family life in northern Michigan. You can find out more at www.amandabarratt.net.

I received a complimentary egalley of this book from the publisher. My comments are an independent and honest review.
Posted by Joan Nienhuis at 7:37 PM