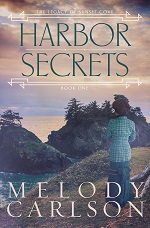 A Peaceful Coastal Town . . . Threatened by a Storm of Secrets.

It's 1916 when newspaper woman Anna McDowell learns her estranged father has suffered a stroke. Deciding it's time to repair bridges, Anna packs up her precocious adolescent daughter and heads for her hometown in Sunset Cove, Oregon.

Although much has changed since the turn of the century, some things haven't. Anna finds the staff of her father's paper not exactly eager to welcome a woman into the editor-in-chief role, but her father insists he wants her at the helm. Anna is quickly pulled into the charming town and her new position . . . but just as quickly learns this seaside getaway harbors some dark and dangerous secrets.

With Oregon's new statewide prohibition in effect, crime has crept along the seacoast and invaded even idyllic Sunset Cove. Anna only meant to get to know her father again over the summer, but instead she finds herself rooting out the biggest story the town has ever seen – and trying to keep her daughter safe from it all. 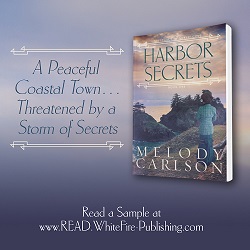 I enjoyed this novel set in an interesting time and place. I had no idea that Oregon had instituted prohibition by 1916, something not seen nation wide until 1920. It was a controversial law, as is shown well in this novel. But it was the law and Anna, our heroine, was determined to see the law upheld. I enjoyed the seaside setting too. The Oregon coast is beautiful. Now the coastal towns are filled with summer tourists. In 1916, with the popularity of the automobile on the rise, it was interesting to read that more tourists were arriving in Sunset Cove every summer.

Carlson deals with several relationship issues in the novel. Anna had been estranged from her father for some sixteen years. She thoroughly disliked her mother, a woman who had abandoned her family when Anna was young. But there have been secrets hidden from Anna and she is greatly challenged when she decides to be with her father for the summer only to find her mother has returned to the town too.

This novel is informative as well as enjoyable just on the story level. There is a subtle hint of a possible romance for Anna. This is just the first in a two part series so I look forward to reading the next one and finding out what the future brings for Anna.

Melody Carlson has written more than 200 books (with sales around 6.5 million) for teens, women, and children. That's a lot of books, but mostly she considers herself a “storyteller.” Her young adult novels (Diary of a Teenage Girl, True Colors, etc.) appeal to teenage girls around the world. Her annual Christmas novellas become more popular each year. She's won a number of awards (including RT's Career Achievement Award, the RITA, and the Gold medallion) and some of her books have been optioned for film/TV. Carlson has two grown sons and makes her home in the Pacific Northwest with her husband and yellow Lab dog. You can find her on Facebook, Twitter, Instagram, and https://www.melodycarlson.com.