The Code of the Righteous Warrior by Rev. Dr. Alyn E Waller with Hilary Beard 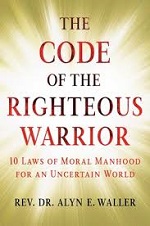 Waller is concerned with what it means for Christian men to be masculine. How does a man exercise his manhood? What should be his mindset? What values should a man have? What does it mean to really be a man?

Waller's answers revolved around being a warrior. He believes “that Jesus was a warrior” and “lived a warrior's life...” (xxii) Jesus provided a blueprint for men to access their best selves. The book contains ten basic laws to help men live a fulfilled life.

Waller disagrees with the traditional church teaching that people should never fight. He believes it is often necessary and when approached righteously, is not immoral. (8) He shows from Scripture that there are times for a man to stand up and fight in the right way. (12) He believes the popular interpretation of “turn the other cheek” is fundamentally inaccurate. He says it is a lifestyle you engage in only when you have stopped the violence and there is no longer the threat of aggression. (13)

Waller is quick to point out that he writes as an African-American. Oppression is a huge aspect of his heritage. He notes the atrocities that “have taken place because the traditional Christian church's imperialistic perspective has made room for dominating others.” (16) This perspective has also allowed the church to say Jesus was passive and interpret His teaching as pacifistic.

Waller teaches in the context of his own warrior training in the martial arts. I can see where such training helps men understand and express their masculinity. He also tells many encouraging stories, his own and those of others. The principles he presents are good ones for living life well.

I think this book would appeal to men looking for meaning in their lives in the context of being masculine. It contains good principles for living in general. It is not overly preachy as Waller uses no Scripture passages to reinforce his life principles. The book is a great deal to take in so it might be best read and discussed with others although no discussion prompts are included. It was hard to identify practical steps for the principles so reading the book with others may help in that area too. For example, Principle 10 is “Don't Quit.” Great advice but the reader is left to his own resources to carry it out.

Alyn E Waller is the senior pastor of Enon Tabernacle church in Philadelphia. He has degrees from Palmer Theological Seminary, Southern Baptist Theological Seminary, and Ohio University. He holds advanced rankings in Commando Krav Maga, American Kenpo karate, Muay Thai, and Naphtali, and has studied warrior cultures all over the world. He has also served in the Army National Guard. He and his wife have two adult daughters.
Hilary Beard is the coauthor of twelve books, including three New York Times bestsellers and two NCAAP Image Award winners. She is a writer, speaker and personal development coach and lives in Philadelphia.

I received a complimentary copy of this book from the publisher. My comments are an honest and independent review.
Posted by Joan Nienhuis at 4:17 PM