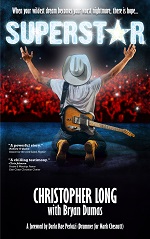 He is the worshiped frontman for Cherry Hill, the hottest act in country music. Trent Davis is a superstar. And he's about to blow his brains out.

We each have our own story – the personal path that led us to salvation. But for country music sensation, Trent Davis, his journey just might kill him first – too much success, too young, too soon.

At age 22, Trent no longer is the naive Midwestern church boy who wrote songs in science class to his high school sweetheart, Tracy. Adored by legions of fans worldwide, he now has become a delusional, greed-driven, drug-addicted alcoholic with a raging ego.

Trent's life spirals further out of control after he is exposed in a torrid affair with the wife of powerful and vengeful businessman, Richard Moore. He's soon forced from his world of sold-out concert appearances, backstage pampering and luxury tour buses, and into a desperate life on the run – an unfamiliar place where his fame and fortune are of no value.

Embracing the drug-hazed perception that is his own marriage and career have been irreparably destroyed, and fearing the certainty of Richard's fatal wrath, Trent attempts to seal his own fate by “finishing the job” himself. But just as he cocks the trigger of the loaded .44 magnum revolver buried in his mouth, Trent's phone rings suddenly. Could his guardian angel be on the line?

You can find out more about the book and read reviews here.

Long's experience in the music entertainment industry is evident as he takes us through the world of the music superstar. It is not a pretty world. I had no idea about the sacrifices one has to make to be a success and the pressures that come along with that success. Remaining a moral person must be nearly impossible. Seeing Trent spiral down was heartbreaking but very realistic.

Long has included a secondary issue of fatherhood. Trent's father was an absent one. Trent resented it fiercely but then became an absent father himself.

This is a good novel for readers who dream of being successful in the music industry. It is also a good one for readers in general as Long gives us an inside view of a superstar musician and then the amazing restoration that comes through the grace of Jesus Christ.

Christopher Long is an author, show biz analyst, award-winning musician, entertainment personality, radio host and missionary. Known for his conversational, common sense writing style, Long is passionate about sharing the “Good News” of Jesus Christ through his unique and compelling stories. He is the author of three non-fiction titles. He also contributes lively content to such entertainment news outlets as MuenMagazine.net, Ink19.com and PureGrainAudio.com. As a popular special events DJ, Long often can be found in an array of party settings throughout Florida's east coast, and on various concert stages rocking out with his wild, award-winning hard band, Dead Serios and his country combo, The Blue Diamond Band. When not writing or performing, Long also enjoys an active role in missions work and youth ministry. His new classic rock radio show, Power Rock 2.0 is expected to launch in 2019. Raised in Missouri's rugged Ozark Mountains and on Florida's sunny Space Coast, Long currently lives near Cocoa Beach. You can find out more at https://christopherlongshowbizguru.blogspot.com/.

I received a complimentary digital copy of this book from the author. My comments are an independent and honest review. The rest of the copy of this post was provided by the author.
Posted by Joan Nienhuis at 6:56 PM

I love the title of this book along with synopsis of the story. I cannot wait to read this book.