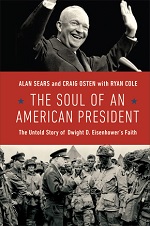 Many US presidential candidates claim Christian faith. We might wonder if the faith is real or if a candidate is a skilled politician just using the claim of faith to further their political career. Eisenhower came under much criticism for his faith and the authors tried to find out if his faith was genuine.

Some of the criticism of Eisenhower's claim to faith arose from the religious experiences of his parents. Ike's religious heritage was in Germany and his ancestor's involvement with Anabaptists. Emigration to America resulted in his parents being involved in the Brethren and then the Jehovah's Witness. Failed prophecy resulted in his father's disillusionment but his mother remained committed to the movement to the end of her life. She did not approve of Ike choosing a career in the military at the Witnesses are pacifist and anti-military.

Ike's military career is reviewed. Often the authors write that Eisenhower's spiritual life is vague or unknown. Mamie, whom Ike married after graduating West Point, had Presbyterian roots. When Ike was elected president and wanted to attend a church in Washington, DC, he chose a Presbyterian one because of his wife's faith. Eisenhower corresponded with Billy Graham and there is assurance Ike had saving faith after the election. He then became quite outspoken about that faith. While “the 1952 election was a turning point in his faith...” I still remain quite unclear as to the nature of Ike's faith before his presidency. (1862/3952) The authors attribute the misunderstandings about Eisenhower's faith to Ike's not wanting “people to perceive that his faith was for political gain.” (1916/3952)

This is a selective biography for readers who want to understand the faith of a US president, particularly while in the office. Many of Ike's prayers, statements and actions reflecting his faith are documented in the second half of the book. They “indicate that Ike's religious awakening upon assuming the presidency was genuine.” (2073/3952) Eisenhower's faith was important in the era of increasing tension with the generally atheistic Soviet Union.

Most of the book serves as a general biography, recounting Ike's military career and presidential experiences. Readers will gain a better understanding of the issues precipitating the Cold War. They will also realize the origin of some religious aspects, such as “one nation under God” and find seeds for the National Day of Prayer. The book does verify Eisenhower's genuine faith later in life but is vague about his military years.

Alan Sears is the founder of Alliance Defending Freedom, which he led as president, CEO, and general counsel for 23 years. He served in numerous positions within the Reagan and Bush administrations.
Craig Osten serves as senior director of research and grant writing for Alliance Defending Freedom. He has more than 30 years of experience providing writing and research on more than a dozen books for well known authors.
Ryan Cole holds degrees in history and journalism from Indiana University and has written extensively about American history for a number of publications.

I received a complimentary egalley of this book from the publisher. My comments are an independent and honest review.
Posted by Joan Nienhuis at 4:40 PM