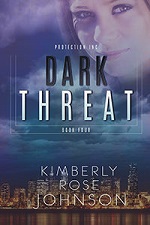 Reporter Trinity Lockhart pursues a story but then unwittingly becomes the story.

Acting on a tip from an anonymous source, Trinity investigates an art trafficking ring at a high-end Seattle gallery. She turns to handsome FBI agent Kyle Richards for help after being spotted by the crooks.

Kyle is drawn to the feisty reporter, but he can’t afford a beautiful distraction when lives are at stake. He must trust his friends at Protection Inc. to watch over Trinity while he investigates the gallery.

Will this couple overcome the impossible odds threatening to keep them apart?

I enjoyed this mystery. The heroine is a crime news reporter so we get some insight into the requirements and dangers of that occupation. I also liked learning some about art forgery and selling stolen art. The characters were drawn well. It was interesting to see a plot where an FBI agent and people from private security worked well together to protect the vulnerable and capture the guilty. There is also a good message included about trusting God in troublesome times.

There is suspense near the end caused by the FBI agent doing a stupid thing. I like it when the villain outwits a smart hero, not when he outwits a non-thinking one. Other than that, a good plot of investigating an art crime ring.

This is a good book for those who like romantic suspense with a strong Christian message. It is informative and entertaining.

Award winning author Kimberly Rose Johnson married her college sweetheart and lives in the Pacific Northwest. From a young child Kimberly has been an avid reader. That love of reading fostered a creative mind and led to her passion for writing. She especially loves romance and writes romantic suspense and mystery with a heart.

Dark Threat features FBI agent Kyle Richards. We first met Kyle in book one of the Protection Inc. series where he joined the team while working undercover for the FBI. He has since become an honorary member of the team and has been in every book since.

When I set out to write this series I planned to only feature the team members, but Kyle is practically part of the team, so he needed his own story too. I thoroughly enjoyed getting into Kyle’s head for this book.

I really wanted to understand how FBI agents think and operate so I listened to an audio book written by a former agent. The man was rough around the edges but it really helped me understand the atmosphere in which agents work. Then I read a book written by a female, former CIA as well as FBI agent. It was fascinating to see the differences between the agencies from a former agent’s point of view.

Trinity, the female lead in Dark Threat is a crime beat reporter. I pretty much knew nothing about the life of a television reporter, so I watched You Tube videos filmed by actual reporters about a day in their lives as reporters. One young woman did a series of videos, which I found extremely helpful. Another had the camera following her on the job. From her I learned about what it’s like to go out on location and how meal times during her day on the job were never guaranteed. She’d grab a bite when she could and sometimes she wouldn’t even be able to finish it because she had to rush to a breaking story.

Finally, I needed to better understand the art world. I have a college friend who is an amazing artist. She has a gallery in Boise, Idaho. I contacted her and picked her brain about art and art galleries.

As for anything related to law enforcement I asked my uncle who is a retired police officer.

The thing I loved most about talking to people about their professions is that one question often snowballed into a deeper conversation about the topic. My friend and my uncle would tell me things I didn’t even know I needed to know.

I think Dark Threat required the most research of all the books I’ve written. I’m not a huge fan of doing research, but I truly enjoyed every minutes of it for this book.

I hope you will enjoy reading Dark Threat even more than I enjoyed writing it!

For Him and My Family, June 15

Because I said so -- and other adventures in Parenting, June 19

Great review, thank you for sharing.

This sounds like a great read! Thanks for sharing!

This sounds really good. Thank you for your review.

I love a good mystery novel!