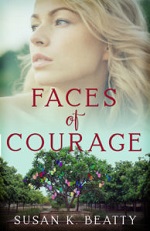 Fear strangles even the faithful sometimes.

Despite every attempt to be brave, fear has defined Olivia Stanford’s life: with each new foster home, when her adopted parents died leaving her all alone again, trusting and marrying her husband, Frank, and coping with his football injuries and career loss.

Without faith, fear only grows in the face of adversity.

And just as courage finally blooms within her comes the terrifying diagnosis: breast cancer.

Some say courage is found at the intersection of faith and grit. How will Olivia manage to summon either in the midst of this new battle?

Beatty has done a good job of exploring the character of a woman who must have courage to deal with serious issues in her life. Olivia's first struggle is with an abusive husband. He is controlling and verbally, emotionally and ultimately physically abusive. Beatty spends over half of the book giving us a very real sense of Olivia's experiences, thoughts and feelings in the face of her husband's behavior. The intensity of the story may be difficult for some to read if they have been in a similar situation.

There are several issues Beatty includes in this novel. One concerns the biblical model for wives. Does a Christian wife stay in an abusive marriage, even to the point of physical harm? Another issue is how events from the past, such as Olivia's abusive father, affect the present. Another issue is the emotional and physical trauma a woman experiences when she is given the diagnosis of breast cancer.

This is an emotionally packed book. Potential readers need to be aware of the spousal abuse and cancer diagnosis contained within. These topics may be difficult for some to read about. Readers will be challenged and inspired to have courage in facing struggles.

”Courage: The intersection of faith and Grit”

Susan K. Beatty is passionate about finding courage through faith and grit, particularly through the trials of breast cancer. Her daughter is a metastatic breast cancer “thriver” and has been an inspiration for her writing. Susan retired from a full-time job in 2017 and is now pursuing a novel-writing career. Her first novel, “Faces of Courage,” is in revision. Susan is the author of “An Introduction to Home Education” (AKA “California Homeschool Manual”), was the assistant director of the SoCal Christian Writers’ Conference and is the president of her local ACFW-OC Chapter. She is a professional writer/journalist. Susan is proof you can begin a fiction writing career after age seventy.

The words “You have breast cancer” can drop you to your knees. What’s worse is when those words are spoken to your thirty-one-year-old daughter. And worse yet when they are spoken to her more than once. My daughter Melanie has had three bouts with breast cancer, the second time classified her with stage IV metastatic breast cancer of which there is no cure. Over an eleven-year period, Melanie has undergone twelve surgeries, one removing two-thirds of her sternum to be replaced by a donor bone with titanium clamps.

Melanie’s courage during these battles inspired me to write about courage at the intersection of faith and grit. True-to-life stories follow characters through cancer and other issues confronting women today.

In Faces of Courage, I wanted to tell a story like Melanie’s but not exactly Melanie’s, a story nevertheless filled with growing courage. Melanie’s journey doesn’t include an abusive husband (Praise God!), but our terrorized heroine Olivia suffers from her husband’s mistreatment, confused by her misunderstanding of how God views her, and challenged by her lack of strong faith. Just as her courage matures and strengthen through these problems, she’s thrown by those knee-buckling words, “You have breast cancer.”

It is necessarily a gritty look at domestic abuse and the realities of dealing with cancer and its various treatments. I wanted to show Olivia’s growth as a wife, how she experienced the cancer, and how, with the help of faith and grit, her courage flourished.

In many ways, this novel is a tribute to women who fight these battles with bravery, even if that valor takes time to develop. I pray the reader, by witnessing another’s journey, is strengthened in her own battles.

For Him and My Family, June 25

Because I said so -- and other adventures in Parenting, June 29

cats in the cradle blog, July 1

Wow..sounds like there is alot to this book! I think it will be a great read!

This sounds like an excellent read with lots of drama. Hard luck all through her life. It should be interesting. Thanks for the chance.

What a heavy plot line. Definitely not a beach read!