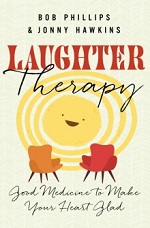 This is quite a collection of mostly funny stuff. There are wacky definitions: Polarize – what penguins see with. There are cartoons: two pigs, “I think I'm having a mud-life crises.” There are witty dialogues: Q. What do you call a man who crosses the ocean twice without taking a bath? A. A dirty double crosser.

Some of them make me want to groan. Some of them have a hint of a moral lesson. An example is the one listed for exercise: “The only exercise some people get is jumping at conclusions, running down their friends, sidestepping responsibility, and pushing their luck.” (259/686)

Some of the entries are a play on words that made me shake my head. Some I just didn't get at all. Some are longer stories with wacky punchlines.

The mostly funny stuff is compiled in alphabetical order so if one needed a joke about getting old, for instance, one could be easily found. Hilarious? Side-splitting? Not really, but you will get a few chuckles out of the collection.

Food for thought: Overeating – An activity that will make you thick to your stomach. (480/686)

Bob Phillips is a master compiler of inspirational verses, Scripture references, and quotes on the lighter, humorous side of life. He has written hundreds of books with combined sales of over 11 million copies. He also serves as executive director emeritus for Hume Lake Christian Camps and is a licensed family counselor in California.

Jonny Hawkins is a full-time cartoonist whose work has appeared in more than 600 publications. He also creates five themed Cartoon-a-Day calendars each year. He and his wife have three children and live in Michigan. You can find out more and see some sample cartoons at https://www.jonnyhawkinscartoons.com/.

Posted by Joan Nienhuis at 4:27 PM

Very nice blog, Thanks for sharing great article.
You are providing wonderful information, it is very useful to us.
Keep posting like this informative articles.
Thank you.

From: Field Engineer
Get to know about cisco data center.

common it problems Each profession has some challenges. However, the problem with most IT help desks is that they let many issues pile up to the extent that sorting them out becomes difficult. In this piece, you will get to learn about some common help desk problems and solutions.