The Sound the Sun Makes by Buck Storm 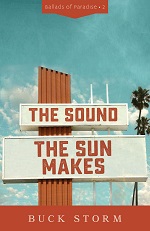 I have mixed feelings about this novel. I like that Storm can create a scene that generates expression. His writing is lyrical, almost poetic and this novel is full of word paintings. Storm's imagination is fluid in depicting magical realism. An old Native American woman standing in the middle of the road really isn't. A classic drive in theater with scores of classic cars populated with people soundlessly ceases to exist in a few hours, leaving no trace. A wild coyote comes to a peaceful rest at a character's feet.

As beautiful as some of the writing in this novel may be, the characters were not engaging. Early Pines, introduced as a man with anger issues, doesn't seem to develop at all. Near the end, given the advice to forgive and reconcile he says he'll think about it. Early came across as a man having lots of adventures, finally able to arrange a violent justice for which he longed. The villain, with unlimited financial, material and personnel resources, just seemed so over the top as to be unbelievable. The major characters almost seemed like people in a movie, which they were in a sense. They seemed flat, created for a purpose other than living real life.

And the plot left me empty of satisfaction. At one point, Calico, the main female character says of a monologue, “I honestly don't have any idea what you're talking about and I don't care.” (138/312) That's how I was feeling too. The plot moved along methodically even if it sometimes seemed the motion was in circles rather than in a forward direction. I never felt compelled to continue reading.

Had I not agreed to review the novel, I don't think I would have finished it. But I am glad I did as the only Christian aspect of it appears near the end. There is an exploration of God's sovereignty and man's choices, whether man freely chooses or all is preordained. Are we merely playing our parts in a grand movie designed by God?

This is a novel for readers who would like one featuring a sort of modern day cowboy with inner demons battling a crazy, beyond belief villain. You'll encounter some beautiful writing and perhaps that will be satisfaction enough.

This is the second book in the Ballads of Paradise series and you can read my review of the first one, The Beautiful Ashes of Gomez Gomez, here.

You can read an excerpt of this novel here.

Buck Storm is a singer and songwriter in Hayden, Idaho. He is the author of several books, including Truck Stop Jesus, Through the Holy Land on the Road Less Traveled, The Miracle Man, and The Beautiful Ashes of Gomez Gomez. You can find out more at www.buckstorm.com.