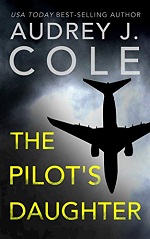 This is another engaging novel from Cole. The plot reflects every airline passenger's nightmare, terrorists taking over the plane. Hold on to your seat when you read this novel as the suspense is intense.

It was clever how Cole got pistols on the plane. I trust the method, while happening in the novel, really isn't possible. The drama on the airplane seemed very realistic to me. The motive of revenge is a powerful one and we see it in full operation. A woman was willing to cause the death of many to carry out her vengeful hatred toward one person.

I liked Cora as our heroine. She is a good example of overcoming fear to do what is necessary. I liked Kyle being on board, playing the hero. While we have met him in previous novels in this series, it was interesting to see him in a situation other than his occupation as a police detective. A romance develops between the two. While it may seem to have gone really quickly, romantic feelings can blossom when people are in intense situations.

While this novel is part of a series it reads really well on its own. The narrative alternates character points of view and that did seem to disrupt the flow of the plot. Other than that, an entertaining novel. Just don't take it with you on your next flight.

You can read my reviews of previous novels in this series: The Recipient, Inspired by Murder, Summer Nanny, Viable Hostage, and Fatal Deception.

Posted by Joan Nienhuis at 6:11 AM