The Keepers by Jeffrey B Burton 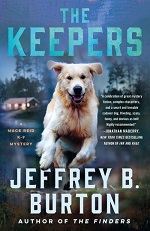 I enjoyed this novel. Although it is the second in the K-9 Mystery series, it read well on its own. (You can read my review of the first in the series, The Finders, here.) I like the characters. Mace has a passel of dogs and does cadaver discovery work. He loves his dogs and they, in tern, will do whatever it takes to protect him. I like Kippy too. She is a gutsy policewoman.

The plot revolves around Chicago corruption in politics and law enforcement. There are some good twists and turns in the plot as corruption is revealed. And the suspense in the second half of the book is nearly continuous. There is a little language but only what fits the character. I appreciate that the novel is clean in that there are no sex scenes.

I appreciate learning about how the dogs do their work. I like Vira, the special dog who can recognize trace elements left by a murderer. Whether a dog can actually do that or not, it makes for an exciting story.

Much of the novel is from Mace's point of view. There are many scenes, however, where Mace is not present so the point of view is that of a narrator. Burton also introduces a new character and his story and only later shows how that character is part of the overall plot. That made for a disjointed reading sensation from time to time.

This is a good novel for those who love an amateur sleuth with two capable sidekicks, one a canine and the other a policewoman.

Jeffrey B Burton was born in Long Beach, California, grew up in St. Paul, Minnesota, received hi BA in Journalism at the University of Minnesota. He has written three previous novels and his short stories have appeared in dozens of magazines. He is a member of the Mystery Writers of America, International Thriller Writers, and the Horror Writers Association. He lives in St. Paul with his wife, a Pomeranian and a Beagle. You can find out more at https://jeffreybburton.com/index.html Photo: Cindy Archer-Burton.