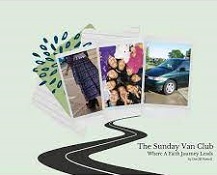 Powell was a principal at an elementary school in the Fresno Unified School District where many immigrant Hmong families settled. She befriended nine Hmong girls and would take them to church and adventures on Sunday in her van. She shares some background of the Hmong people and the personal stories of the girls.

I appreciate the informative section on the Hmong people. I discovered how they got to the Vietnam and Thailand area, how they were part of the resistance to communism, became refugees living in camps then coming to America. Many settled in the Central Valley of California, the land being similar to their farming homeland. I learned that, while the Hmong lived in several places in Asia, they maintained their own customs and language.

One little Hmong girl befriended the principal of her elementary school. Then more joined her. Powell kept up with the girls, even after she retired. She shares her thoughts and various communications with the young women.

The format of the material contained in the book could have been presented in a way that flowed better and was more cohesive. At times, some of the material seems to be email exchanges, such as “Let's meet at Starbucks.” (1561/3131) Their were memoirs from the girls and Powell's thoughts and advice in return. There were also sections by Powell giving us more information on her experiences. Some sections were in italics and there seemed to be no consistency, at times Powell's comments while at other times a girl's thoughts. I did read a galley and some of the inconsistencies may have been cleared up in the final text.

The stories included in this book are encouraging, seeing young women rising above difficulties to pursue life. It is an example of a book introducing readers to another culture and the challenges it presents in a new country. It is also an example of how one person can influence so many by caring. Retirement was not the end for Powell, she continues providing life lessons for the girls well into her second half of life.

Dot Powell is the author of two previous books. After her retirement as an elementary school principal, she served as the Executive Director of the nonprofit, READFresno, which focused on community-wide literacy. She also served as the co-founder and Executive Director of SALT Fresno, a nonprofit magazine inspiring Christ-believers to go public with their faith. A native of Kentucky, she moves to California in 1970. She spent more than three decades in education with the Fresno Unified School District. You can find out more at https://www.dotjbpowellauthor.com/.

I received a complimentary digital copy of this book through The Violet Agency. My comments are an independent and honest review.