Faith, Nationalism and the Future of Liberal Democracy by Elcott, Anderson, Cremer and Haarmann 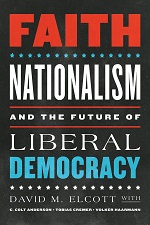 The authors have written this book to draw our attention to the use of religious identity to fuel populist nationalism. They have seen patriotism fused with religious identity challenging democratic norms and demonizing those who do not share that identity.

The authors help us understand what is happening in the political realm around the world. They review the use of religious identity in politics and explore how religion has been used to give force to political agendas. They offer an analysis of what has been happening in Europe and the U.S. regarding religious identity and nationalism. They give ideas how Catholicism, Protestantism and Judaism can nourish liberal democracy.

I am a Protestant layperson and not a particular student of history nor politics. Here are some of the things I learned from this book. First is the influence and responsibility of religious leaders. The authors note that “...the exhortations of religious leaders to support the principles and values of liberal democracy can have significant impact by legitimizing or debunking right-wing political use of religion.” (834/4491) Next is that traditional political systems did not know how to handle the use of religious identity, such as the use of Christian identity to under gird a political movement in the U.S. The use of religious identity to stoke fear and anger, the authors note, remains strong today.

Evangelical Christians will have a problem with the authors suggesting there are many ways to know God and truth. From Judaism, “No one, therefore, and no religious, political, or social tradition can own all of God's truth.” (2242/4491) It is sad, the authors note, that rather than accepting multiple narratives, each illuminating an aspect of God, too many believers say there is only one true narrative. (2578/4491)

My take away from this book is that political movements have used religious identity to promote their agenda, claiming God is on their side. It has happened in the U.S. and in Europe. Religious leaders need to stand up and declare that the use of Christianity, for example, to promote nationalism is not what Christianity is about.

This was not an easy book to read. It is written in a more scholarly fashion than may be appreciated by the average lay person. I know there were many parts of the book I did not fully comprehend, lacking sufficient historical and political knowledge. Nonetheless, this book is a timely call for religious leaders to be aware of how religious identity is being hijacked for political use and to reflect on their own role and responsibility.

David M Elcott is the Taub Professor of Practice in Public Service and Leadership at the Wagner School of Public Service at NYU and director of the Advocacy and Political specialization.

C Colt Anderson is the outgoing dean of the Graduate School of Religion and Religious Education at Fordham University.

Tobias Cremer is a Junior Research Fellow at Pembroke College, Oxford, and a recent Ph.D. From Cambridge.

Volker Haarmann is the chair of the Department of Theology of the Protestant Church in the Rhineland.

Posted by Joan Nienhuis at 1:30 PM