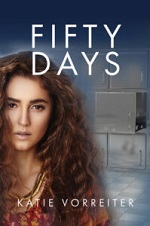 Three days ago, Maggie Lehman’s beloved mentor and friend, Jarrett Adams, was murdered on live television. Grief stricken, Maggie traverses a Washington DC under curfew, but when she arrives at the morgue, the body is missing—and her presence is recorded on the security video.

As dawn breaks over the city, Maggie encounters Jarrett on the street—and he’s very much alive. Either she’s gone mad—again—or Jarrett really is back.

While the US loses its grip on democracy, government thugs eager to contain what Maggie knows hound her every step, and the good intentions of a man from her past only tighten the noose. The powerless and bewildered Maggie seeks Jarrett and the return to how things were, but finds she must give up what she wants most to gain what she can hardly imagine.

What an imaginative novel of alternative history. Vorreiter has done a good job of imagining the situation should Jesus have not come to earth two thousand years ago but do so today, in the United States. A strength of this novel is making very real the agony Jewish people experienced when they believed the Messiah had come. We see how family members distrusted them and accused them of being delusional. Religious officials tried to silence the converts.

I appreciate many elements Vorreiter has included in her novel, such as a woman bringing the news of the empty morgue and then being dismissed by the male disciples. I thought the charges against Jarrett (Jesus) were quite complex as was the way he was killed without a trial. I appreciate the character of Maggie, freed from demon possession. I don't understand her long trek across country and the purpose that aspect of the plot served other than to lengthen the novel and perhaps give a more personal flavor to the story.

Creating a novel of alternative history is a challenge. It is interesting Vorreiter had the Messiah die and resurrect in the U.S. Why the United States instead of the Middle East? Would the U.S. even exist if Jesus had not come when He did, if religious persecution had not occurred centuries later, causing Protestants to travel to the new world for religious freedom? At one point, it seems the KJV is quoted. (928/7491) Would it have existed in this alternative history? It is mind boggling to imagine what the U.S. and society in general would be like without the influence of Christians throughout the centuries.

This is a good novel to get an idea of current Jewish faith and practices and how those would be impacted by the arrival of Messiah. The book is thought provoking and will challenge your idea of how the Messiah would interact with his followers, such as playing soccer with the guys. It will also inspire you to review the biblical account of the post resurrection events.

Katie Vorreiter makes her home in the diverse and beautiful San Francisco Bay Area. She works in high tech as a proofreader as well as a freelance fiction copy editor for a small press. While she admits to being a grammarian, she considers herself a fun one.

After studying and later interning in Madrid, Spain, Katie continues to use and improve her Spanish as much possible—especially when a travel opportunity arises. Aside from that, she DIYs at home with her husband in their almost empty nest, travels to Colorado where their two young-adult children study, and snuggles with her pup who promises not to grow up and go away to college.

Please see Katie’s webpage at katievorreiter.com and sign up for her newsletter for giveaways, sneak peaks, and insider info. Check out her debut novel, No Turning Back, “a propulsive action tale.”

2,000 years ago, a body disappeared from a cave. But what if it happened yesterday?

What would miracles look like in the age of Photoshop? Might our cynicism dismiss a resurrected Jesus as a David Blaine wannabe looking for his 15 minutes of YouTube fame?

Fifty Days was inspired one Easter Sunday as I sat admonishing myself to listen with new ears and to not feel that I’d been there, done that for the most amazing story ever told. But those women at the tomb: I had no concept of what their day-to-day lives were like. I wanted to identify with them, but how could I walk in their shoes when I couldn’t envision their sandals?

I said to myself, “it’s not like the events could take place in my world”… and my imagination took off as Maggie walked into my life. More precisely, she walked through the pre-dawn streets of Washington DC, driven to get to the morgue to see Jarrett’s body. But when she got there, he wasn’t there. His body was missing, and unfortunately for Maggie, she was caught on the security video.

From Easter to Pentecost (hint, that’s a period of fifty days), we see the followers of Jesus experience a huge change. We don’t know much about the weeks that intervened, and we never see Mary Magdalene again in scripture after Easter morning. So that gave me a lot of room to imagine: what would it be like to go from hiding in bewilderment and fear to the bold empowerment of Pentecost?

For Maggie it’s a matter of keeping one step ahead of the thugs pursuing her and the man from her past whose good intentions only create havoc for her, while she searches for a way to clear her name, or better yet, be reunited with Jarrett.

Hebrews 13:8 says Jesus is the same yesterday, today, and forever. Thus, whether in a robe, jeans and a tee shirt, or a spacesuit, Jesus and his truth are unfailing, unchanging. Fifty Days isn’t about “updating” those truths. But boy, imagining hanging out with his followers at Starbucks made them seem a lot more three-dimensional to me. And to be honest, I find myself a little jealous of Maggie’s relationship with Jarrett—she is completely sold out. Totally confident in his character and power. There is not only love between them, but affection. Fleshing that out has made me look at my relationship with Jesus in a new light.

For Him and My Family, June 9

Because I said so -- and other adventures in Parenting, June 10

The Adventures of a Travelers Wife, June 14

Spoken from the Heart, June 14

This sounds new and refreshing! I love reading stories that aren't exactly what I typically read!

A thought provoking review. Definitely have to read this!

Thanks for your review! You ask some insightful, tough questions! I don’t necessarily have great answers, other than that I wanted to write about a world that I knew (and was only capable of writing about that world!). I wanted to see Jesus in blue jeans and a T-shirt, at Starbucks. I wanted to explore how the most amazing story of all time would still be as mind boggling and life altering in my own neck of the woods. Thanks for coming along for the ride with me!
Blessings,
Katie Vorreiter

Thank you for sharing your excellent review!