A Brush With Murder by Bailee Abbott 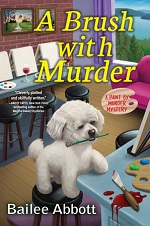 I have mixed feelings about this cozy mystery. I liked the general setting of a lakeside town in western New York state. I like the strong community of artisan shop owners too. Abbott's writing style is easy to read.

I found the characters a bit hard to like. Izzie is supposed to be an enterprising new business owner yet has no trouble being gone from the business at crucial times. Starting a business is hard work and Izzie is certainly not up to the task. No wonder she asked her sister, Chloe, to help her. Chloe was hard for me to like too. She has a short temper, gets irritated way too quickly, is often fuming, is rude and sarcastic. Abbott has crafted characters to the extreme. Reactions are overly done with people gasping, jumping, dropping things when surprised. And Izzie is always hiccuping, something that became quite irritating. And Hunter, while a handsome detective, was actually ineffective. An attorney found the aliases and criminal record of one of the suspects in a matter of hours when Hunter didn't know that information after days of the investigation. Hunter never got very far in solving the mystery for all his bluster.

The plot presented a suitable mystery. The murdered woman was a reviewer of businesses for the local newspaper. Her reviews where savage so there are suspects galore. Abbott provided plenty of red herrings and, irritatingly, newly revealed information near the end. Because of that new information, the resolution to the murder mystery felt off to me. If the reader did not suspect the right person, that would be because there were not many clues. Near the end, the killer, talking to Chloe, says there were many others who had better opportunities and motives. (3756/4068) And Chloe admits at that point she didn't have a clue as to the why of the killing. (3762/ 4068) If the amateur sleuth and the detective were both ignorant to the motive and identity of the murderer, I didn't feel bad that I hadn't figured it out.

I like to learn something new when I read fiction. I liked the information about having an event of painting a portrait of a pet and the work going into preparing the drawing on the canvas. I did learn a bit about collectibles too. I was surprised that Izzie used oils in her customer painting projects. (Willow had to use turpentine to clean a paint spot off her clothing.) I would have thought acrylics would have been used with amateur projects.

Even though I felt there was over characterization and issues with the plot structure, I liked the setting and will be on the lookout for another mystery from Abbott.

Bailee Abbott is a retired teacher who now spends her days plotting murder and writing mysteries. She is a member of Sisters in Crime as well as of International Thriller Writers. She lives with her husband and furry friend Max in the quiet suburbs of Green, Ohio. She also writes the Sierra Pines B&B mystery series under the name of Kathryn Long.

Posted by Joan Nienhuis at 9:36 AM