New York: Give Me Your Best Or Your Worst Blog Tour 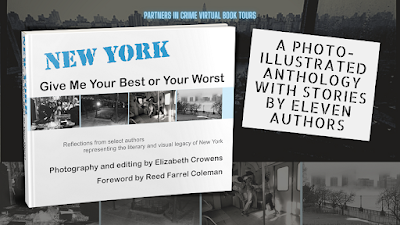 New York: Give Me Your Best or Your Worst 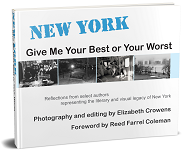 An Anthology and Celebration of the Big Apple

I'm an unabashed, unapologetic lover of New York City, my hometown, and New York: Give Me Your Best or Your Worst is right up my dark, deserted alley. New York's at its best when you sneak up on it, glance at its sideways, or let it glance sideways at you. The pros and photos in this collection all show New York's best, even when they purport to be showing its worst; in NYC, that's how we roll. A fine addition to your New York bookshelf, a collection to savor.
~ SJ Rozan, best-selling author of The Art of Violence

This is an interesting book for readers who would like to get a flavor of the literature from authors centered in New York City and see a number of street photographs taken over the decades. Accomplished writers from the city contributed short stories and a poem. Some were entertaining while others were quite unusual. My favorite was the one with the talking fish. Reading them certainly gave me an idea of the variety of people and experiences in that city. And the photos are very interesting. I liked seeing the black and white candid photos from the bell bottom era.

It is daunting to be asked to say something about New York City that hasn’t already been said with more eloquence than I could muster. As with many of the writing gigs I’ve accepted without carefully considering the consequences, I suppose I would have been better off letting someone else tilt at this windmill. With all due respect to Don Quixote, here goes.

My initial inclination was to do something about how New York City, because of its geography, is fated to be a place of stark contradictions: of churning and yearning, of inclusion and exclusion, of acceptance and denial. Unlike other cities, New York cannot expand outwards, only upwards. While that sounds great and may make for glorious postcards of a majestic, everchanging skyline to send to the folks back home, it leaves out New York City’s most valuable commodity—its people.

I could have written about the unknown or unseen New York, the scores of little islands—some populated, some not—in Jamaica Bay, in the harbor, in the East River, in the Hudson. Places like Ruffle Bar. Ruffle Bar? Google it. Places once home to psychiatric and typhoid quarantine hospitals. Buildings abandoned or demolished. Islands whose only residents are the dead buried there and forgotten. Interesting, certainly, but again it would have left out the thing that makes New York City what it is.

As a crime fiction author who sets much of his work in New York—largely in Brooklyn and Manhattan—I have done countless panels and interviews about the city. My friend and award-winning colleague, Peter Spiegelman, says that setting is the soil in which you grow your characters. He is so right. Ask any author worth his, her, or their salt, and they will tell you that a book that can be set anywhere isn’t much of a book at all. A book must be of its place. So too must a person.

New York City isn’t one place. It is a thousand places, ten thousand places. And because it is all those places, its people are different neighborhood to neighborhood, sometimes street to street. Certainly, house to house, apartment to apartment. Do we shape the place or does the place shape us? Instead of doing an overview, a sort of general discussion of this question, I think it better to talk about one place—Coney Island—and how it shaped one person—me.

I grew up in the shadow of Coney Island Hospital, about a mile or so away from the amusement park. I was right on the border of Brighton Beach, Gravesend, Sheepshead Bay, and Coney Island. I could explain how each of these neighborhoods differ, how, for instance, Sheepshead Bay is, for all intents and purposes, a fishing village. But no, not here, not now. At one point in my life or other, I have claimed to be from all these places. Yet it is Coney Island that resonates.

When I was four, my dad—a bitter, blustery, and angry man—was diagnosed with an aggressive bone sarcoma which he battled to a standstill for thirty plus more years. After his initial round of surgery and treatment, he was instructed to not do any activities that might jar or adversely affect his leg. Yet on summer Sundays, he would tell my mom that he was taking me for a car ride. We took car rides, alright, straight into Coney Island.

He would put me on the kiddy rides, take me to Nathan’s Famous, buy me pistachio soft serve. Then, in one of the few acts of true defiance I ever saw from him, he would get on the carousel and grab for the brass rings. On one of these Sundays, he pointed to the Parachute Jump. The “Jump” rose into the air two hundred and sixty feet. All orange steel, it looked like a cross between the Eiffel Tower and the skeleton of a giant umbrella.

“When that ride opened up,” he said, “my best pal Charlie and me got on it. The parachute dropped a few feet and then … nothing. We were stuck up there for forty-five minutes just hanging in the air. It was great.”

Of course, by then, the Parachute Jump, once part of Steeplechase Park, had been closed for years, its parachutes and rigging long gone. That day, those days, have stayed with me ever since. And when, as a teenager, I would go back to Coney Island with my friends, get high and ride the Cyclone, I would always look up at the Parachute Jump. It came to symbolize my dad to me. Mighty, impressive, but abandoned, and powerless. I loved my dad because I could see past his bluster. He let me see past it. All because of those few Sundays in Coney Island.

As if by osmosis, Coney Island began imposing itself in my work. My series character, Moe Prager, worked in the Six-O precinct in Coney Island. Scene after scene in the nine Moe books take place there. Even twenty-plus books later, in my new series, I cannot escape the gravity of Coney Island. It calls to me in a way I cannot explain other than to say it is romance in the way the Romantic poets understood it.

In my Edgar Award–nominated short story “The Terminal,” I wrote this:

“…He liked how Coney Island displayed its decay as a badge of honor. It didn’t try to hide the scars where pieces of its once-glorious self had been cut off. Stillwell Avenue west was like a showroom of abandonment, the empty buildings wearing their disuse like bankrupted nobility in frayed and fancy suits. He had come to the edge of the sea with the other last dinosaurs: the looming and impotent Parachute Jump, the Wonder Wheel, Nathan’s, the Cyclone.”

I could never have written those words in that way had I grown up in Washington Heights or Rego Park. New York City poets and writers are shaped by their families, yes, but shaped as much by where as by who. That is the magic of New York. This book will shine a light on the rest of that magic. By the way, my children and I have slightly different tattoos of the Parachute Jump: My son and I on our forearms; my daughter on her triceps. In those tats my dad and the Coney Island that was will live on.

About New York: Give Me Your Best or Your Worst:

Writer and photographer, Elizabeth Crowens is one of 500 New York City-based artists to receive funding through the City Artist Corps Grants program, presented by The New York Foundation for the Arts (NYFA) and the New York City Department of Cultural Affairs (DCLA), with support from the Mayor’s Office of Media and Entertainment (MOME) as well as Queens Theatre.

She was recognized for New York: Give Me Your Best or Your Worst, her photo-illustrated anthology, which brought her published book along with ten other authors to Mysterious Bookshop in Lower Manhattan at 58 Warren Street on Monday, October 25, 2021 at 6:30 p.m. for an in-store event and author signing along with a simultaneous Facebook Live presentation and recording for Jim Freund’s WBAI program Hour of the Wolf.

Visit the stops on this tour for more great reviews, interviews, and guest posts from our hosts and authors!

Click here to view New York: Give Me Your Best or Your Worst Tour Hosts

I received a complimentary digital copy of this book through Partners in Crime Virtual Book Tours. My comments are an independent and honest review. The rest of the copy of this post was provided by Partners in Crime Virtual Book Tours.
(My star ratings: 5-I love it, 4-I like it, 3-It's OK, 2-I don't like it, 1-I hate it.)
Posted by Joan Nienhuis at 5:43 AM

Thanks for the review. I found this book to be fun and very interesting. I also love the "talking fish" story :-)