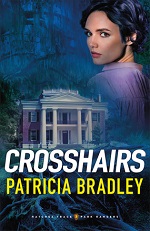 Bradley's latest novel takes us to Natchez. The heroine is Ainsley, an investigator with the National Park Service. Having grown up in the area, she is assigned to investigate a murder in the park.

The novel contains three interwoven plots. The first is the teen murdered in the park. Linc, a previous FBI agent and now with the NPS, is asked to help on the investigation. The two have a romantic history and sparks fly, at first generated by irritation on Ainsley's part.

The second plot involves three diaries Ainsley's aunt has found. They date to the 1850s and are valuable to several people. Two are stolen and the aunt is harmed. Ainsley and Linc are working on that case too. The final plot concerns an escaped convict Ainsley had helped put in prison. He had sworn to meet out deadly revenge upon her and her life is in danger.

The three plots make for lots of action and there is a good twist at the end. There is also an additional issue of Ainsley and her father. Tension exists between the two. It seems he is more concerned about his run for office than the welfare of his daughter. Bradley's writing style is good and I found the novel engaging. There is a good faith message included. I do wish Bradley had included more setting description as this is an area I have never seen and would like to know more about it. Lack of setting description is characteristic of all the books in this series. It looks like there is one more in the series and I'll be waiting for it.

You can read my reviews of the earlier books in the series: Standoff, Obsession.

Patricia Bradley is the author of Standoff, Obsession, and Crosshairs, as well as the Memphis Cold Case novels and Logan Point series. She won an Inspirational Reader's Choice Award in Romantic Suspense, a Daphne du Maurier Award, a Touched by Love Award, and was a Carol Award finalist. She is a member of American Christian Fiction Writers and Sisters in Crime. She lives in Mississippi. You can find out more at www.ptbradley.com.